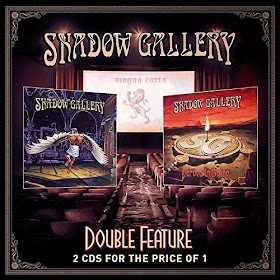 Shadow Gallery is one of those rare bands that has built upon its own musical influences and used them to weave a unique sound and vision that, in turn, has influenced other bands in the prog-rock and metal communities. Originally formed as Sorcerer in 1985 by singer Mike Baker and bassist Carl Cadden-James, the band went through various line-up changes until it settled with guitarist Brendt Allman and keyboardist Chris Ingles.

Drawing upon influences as diverse as Rush, Dream Theatre, and Pink Floyd, the band changed its name to Shadow Gallery and recorded the demos that would become their self-titled 1992 debut album, which was released in Europe and Japan by Magna Carta Records. Another line-up shuffle followed, the band adding guitarist Gary Wehrkamp and drummer Kevin Soffera for Shadow Gallery’s 1994 sophomore album, Carved In Stone. The band was the second signed by Magna Carta after Magellan, and would record four of their six albums to date for the label.

On August 7, 2015 Magna Carta will release Shadow Gallery: Double Feature, a limited edition, budget-priced two-disc set comprised of the band’s self-titled debut and Carved In Stone. This is a pretty good deal for stateside prog-rock fans, as Shadow Gallery’s debut has never been released in the U.S. in any form. Although widely acclaimed for its myriad of prog-rock styles, Shadow Gallery, the album, suffered from weak production. It’s notable for the band’s mature songwriting, however, Baker’s incredible vocals, and their virtuoso instrumental skills.

Carved In Stone is revered by prog fans as an enormous stylistic breakthrough for the band, the addition of Wehrkamp and Soffera providing the missing links in the Shadow Gallery chemistry, representing the point where the band’s talents and their musical ambitions first aligned. Primarily a studio outfit for the first decade and a half of the band’s existence, Shadow Gallery began making sporadic festival appearances in 2010, the electrifying performances cementing the band’s legacy as one of the most innovative and exciting prog-rock outfits of the 21st century.

The current Shadow Gallery roster features original guitarist Brendt Allman and bassist Carl Cadden-James, longtime guitarist and keyboardist Gary Wehrkamp, singer Brian Ashland (taking over after the 2008 death of Mike Baker), and drummer Joe Nevolo. This is the line-up that recorded the band’s 2009 Inside Out Records release Digital Ghosts. It was those first two Shadow Gallery albums that set the stage for the band’s subsequent success and status in the progressive rock community, now available together as the inexpensive Shadow Gallery: Double Feature courtesy of Magna Carta.

Shadow Gallery tracklist:
1. The Dance of Fools
2. Darktown
3. Mystified
4. Questions at Hand
5. The Final Hour
6.  Say Goodbye to the Morning
7. The Queen of the City of Ice