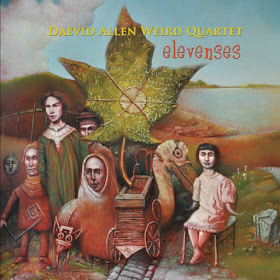 Singer, songwriter, and guitarist Daevid Allen sadly passed away in March 2015 at 77 years old, but he’d led a full and inspirational life. One of the most innovative musicians to leave his mark on the world of progressive rock, Allen was a founding member of 1960s-era trailblazers the Soft Machine, although he had to drop out of the band before they recorded their first album.

Allen also helped form the legendary prog-rock outfit Gong in 1968, recording half a dozen albums with the band – including their influential Radio Gnome Invisible trilogy of albums – before launching a solo career that carried on, one way or another, until his death. There were also plenty of Gong reunions through the years, as well as offshoots of the band that Allen took part in.

On February 12th, 2016, Purple Pyramid Records will release Elevenses, the final album from Allen and his band, the Daevid Allen Weird Quartet, which included multi-instrumentalist Don Falcone of Spirits Burning, bassist Michael Clare of Daevid Allen’s University of Errors, and drummers Trey Sabatelli of the Tubes and Paul Sears of the Muffins. Elevenses is the second album by the band, following 2005’s DJDDAY, which was released under the name “Weird Biscuit Teatime.”

For his swansong, Allen created his typical musical mix of prog, art-rock, psychedelic rock, and experimental music; still, Elevenses serves up a few surprises, including a blues song and an Irish-styled folk song. Anything Allen recorded is always worth a listen, so check out Elevenses and if you like what you hear, dig into Gong’s early ‘70s catalog or any of Daevid Allen’s many solo efforts.