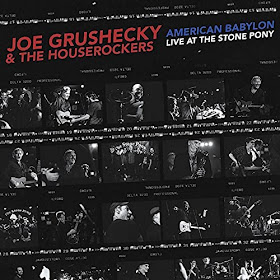 In the course of my lengthy and glorious career as a critic of rock ‘n’ roll music, I’ve been privileged to have seen, literally, hundreds of live performances by some of my favorite musicians. In the 1970s and early ‘80s, I was lucky enough to witness awe-inspiring shows by some of the true legends of rock ‘n’ soul music – the Rolling Stones, Stevie Wonder, Prince, Bruce Springsteen, Bob Seger – while during the latter half of the ‘80s I covered artists as diverse and talented as Stevie Ray Vaughan, Michael Jackson, Cyndi Lauper, Living Colour, and R.E.M. among many others. My overly-belabored point is that I’ve seen a lot of live music and, via my tenure as a writer for a bootleg-oriented publication during the ‘90s, I’ve also heard live albums by lot of bands that I never got to see perform.

Among the literally hundreds of shows I’ve enjoyed (and a few that I didn’t), I’d place Joe Grushecky & the Houserockers in the top three, easily, alongside Springsteen and SRV for pure energy, entertainment, and an earnest joy in the simple act of making music. You may not be familiar with Grushecky – the talented singer, songwriter, and guitarist fronted the acclaimed Iron City Houserockers in the mid-to-late ‘70s and, after that band broke up, he carried on as a solo act with the Houserockers behind him. A ‘Rust Belt’ rocker with molten steel in his veins, Grushecky has continued to pursue the promise of rock ‘n’ roll long after the average man would have given up the dream and become a banker or a CPA. Working a day job and rockin’ at night and on weekends, Grushecky long ago accepted that he’d never be a star, but the fire within still burns hot and he’s made a lot of great music while most of his contemporaries have faded away.


Grushecky has released live albums before – 1999’s excellent Down The Road Apiece Live and 2011’s equally esteemed We’re Not Dead Yet come to mind – but American Babylon: Live At The Stony Pony is something special, indeed. Widely considered to be Grushecky’s career milestone, 1995’s American Babylon was produced by Joe’s pal Bruce Springsteen, who also added guitar and co-wrote a pair of the album’s songs. Given the trend of rockers performing their best (or their favorite) album in its entirety, Grushecky & the Houserockers decamped to Springsteen’s backyard to perform American Babylon song for song at the legendary Asbury Park, New Jersey club The Stone Pony in October 2015.

This live recording of American Babylon adds to the vitality and creative zen of the studio album with a crackling energy and barely-concealed menace that revels in a cacophony of galloping drumbeats, steely bass lines, and clashing guitars. The powerful “Dark and Bloody Ground” opens the show, the song capturing the plight of the Native American both in its muscular instrumental arrangement but also in Grushecky’s strong but nuanced vocals and lyrical poetry. Grushecky’s acoustic guitar strum opens the lovely “Never Be Enough Time” before the band kicks in with an explosion of sound and fury that swirls around the twangy, Duane Eddy-styled fretwork of Joe and his son Johnny. The song’s gorgeous instrumentation magnifies the romantic emotion of the lyrics while Grushecky’s solos channel the history of rock ‘n’ roll heartbreak into a flurry of impactful notes.


Grushecky wrote “American Babylon” as a response to the anarchy and malaise that gripped Rust Belt cities like Detroit, Cleveland, Buffalo, and his hometown of Pittsburgh. A powerful social statement matched nicely by a clamorous soundtrack, the performance here amplifies that of the studio album tenfold, screeching guitars and mortar-fire drumbeats sadly reinforcing the truth that America’s decline has only gotten worse in the past 20+ years. “What Did You Do In The War” is a sly story-song with a strong political statement and bullying instrumentation. Harking back to the apex of the war in Viet Nam circa 1969, the lyrics cleverly allude to John Fogerty’s “Fortunate Son” as lyrics name-check Jimi Hendrix and the moon landing above the stunning fretwork and chaotic percussive rhythm.

By contrast, the mid-tempo “Homestead” is the sort of working class ballad that Grushecky excels at writing and performing, the singer at his most Springsteen-esque here with a wonderful story song that is lyrically and musically rich with blasts of harmonica, rhythmic percussion, harmony vocals, and waves of mesmerizing twin guitars. An unbridled rocker, “No Strings Attached” spotlights Grushecky’s conversational songwriting skills with a tale of the chance meeting of two former lovers that’s delivered above blustery drumbeats, ambitious melodic changes, and Grushecky’s underrated, imaginative fretwork. “Only Lovers Left Alive” is the mournful end to American Babylon, a romantic dirge with staggered rhythms, razor-sharp guitars, and raw emotional vocals that display the slightest glimmer of hope amidst the darkness. Grushecky’s fiery guitar solos here are a thing of fragile beauty, soaring above his insightful, elegant lyrics with phoenix-like grace.


Familiarizing myself again with American Babylon, an album that I admittedly haven’t listened to in a couple of years, I’m reminded of why I fell in love with rock ‘n’ roll as a young teenager in the first place. Noticed mostly for its Springsteen connection when it was originally released, Grushecky and gang – including longtime Houserockers Art Nardini (bass), Joffo Simmons (drums), and Joe Pelesky (keyboards) – created a near-perfect rock ‘n’ roll album in American Babylon. The album offered a social and political statement that is sadly appropriate to this day and, as performed live, shorn of the constraints of the studio, Grushecky and his talented band roar with the heat and fire of a blast furnace, delivering a magnificent rock ‘n’ roll tour de force that demands your attention. Grade: A+ (Schoolhouse Records, released July 25, 2016)