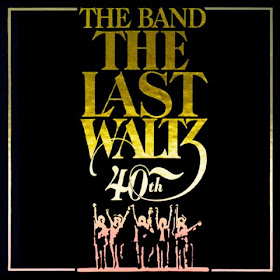 It’s one of the most famous shows in rock ‘n’ roll’s long, storied history. On Thanksgiving Day in 1976, roots-rock legends The Band took the stage at the Winterland Theatre in San Francisco, California for their farewell concert. Filmed with a whopping seven 35mm cameras by acclaimed director Martin Scorsese, the show was released theatrically in April 1978 as The Last Waltz, widely considered one of the greatest concert films ever made. The concert also spawned the release of a three-LP live set that peaked at #16 on the Billboard album chart.

The members of The Band – Levon Helm, Rick Danko, Garth Hudson, Richard Manuel, and Robbie Robertson – were joined during the concert by a literal “who’s who” of mid-‘70s rock and blues royalty, including Bob Dylan, Muddy Waters, Eric Clapton, Joni Mitchell, Neil Young, Ronnie Hawkins, Ron Wood, Ringo Starr, Neil Diamond, and Van Morrison, among others. The concert overall lasted better than five hours, and a lot of performances were cut from the final film, including two improvised jam sessions, the first of which included Clapton, Young, Wood, and Chicago blues legend and the other including the aforementioned artists plus guitarist Stephen Stills.

On November 11th, 2016 Rhino Records will celebrate the 40th anniversary of The Last Waltz with the release of three new reissues, including the first pairing of the audio and video in a single set. The Last Waltz 40th Anniversary Deluxe Edition is a four-CD plus Blu-Ray set that includes the complete audio recording of the concert (54 tracks), including rehearsals and outtakes along with the complete film on Blu-Ray disc. This set includes a number of rare performances that didn’t show up on the original soundtrack album, including Joni Mitchell singing “Furry Sings The Blues” and “All Our Past Times,” with Clapton and Dr. John’s “King Harvest (Has Surely Come).” Limited to 2,500 copies this edition includes new liner notes by David Fricke and Ben Fong-Torres.

For those that just want the music, love vinyl, and don’t care much about the visuals, the complete audio recording from The Last Waltz, including rehearsals and outtakes, will also be released as a six-LP set pressed on 180gram vinyl and packaged in an ornate lift-top box. For those on a budget, the original soundtrack will be released as a two-CD set, newly re-mastered from the original master tapes. Finally, for those with deep pockets, there’s The Last Waltz 40th Anniversary Collector’s Edition, which will be released on December 9th, 2016 in a limited edition of 2,500 copies worldwide.

This set includes the entire audio recording of the concert and the film on Blu-Ray (like the ‘deluxe edition’) and features a second Blu-Ray disc with rarely seen vintage ‘90s interviews with Scorsese and Robbie Robertson and a 5.1 audio mix of the original album. The 'Collector’s Edition' also includes a red faux-leather bound 300 page book with a full replication of Scorsese’s shooting script, rare photos, set sketches, fold-out storyboards, and a foreword by Scorsese. It’s all in all a pretty swank presentation of a top drawer event…check 'em all out on the Rhino Records website.