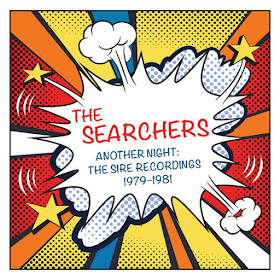 The Searchers were one of the leading lights of England’s 1960s-era ‘Merseybeat’ scene, the band holding its own on the charts with contemporaries like the Beatles, the Hollies, and Gerry and the Pacemakers. Originally formed in 1959 in Liverpool as a skiffle band by guitarists John McNally and Mike Pender, the band scored its first chart-topper with a cover of the Drifters’ 1961 hit “Sweets For My Sweet.” They’d subsequently enjoy hits with covers of songs like Jackie DeShannon’s “Needles and Pins” and “When You Walk In the Room”; the Orlons’ “Don’t Throw Your Love Away”; and the Clovers’ “Love Potion No. 9.” Best known as interpreters of other artist’s songs, the Searchers nevertheless scored the occasional hit with original tunes like 1965’s “He’s Got No Love” (#12 U.K.).

By the end of the 1960s, the hits had dried up as rock ‘n’ roll moved towards harder and more progressive directions. The Searchers continued to tour throughout the ‘70s, however, performing contemporary songs by artists like Neil Young and Loggins & Messina alongside their ‘60s hits. When rock music began to turn back to the past as younger ‘new wave’ artists incorporated ‘60s-era sounds and influences into their songs, the Searchers had hung around long enough to take advantage of the musical evolution. They were the real deal, ‘60s-era music-makers who had updated their sound with enough of a contemporary edge to land the band a deal with Sire Records. The Searchers recorded a pair of excellent albums for Sire – 1979’s The Searchers and the following year’s Love’s Melodies – both of which stand proudly among the best power-pop releases of the era. Both of these long out-of-print albums have been combined as the two-disc Another Night: The Sire Recordings 1979-1981 by archival specialists Omnivore Recordings, with seven bonus tracks added to the original albums. 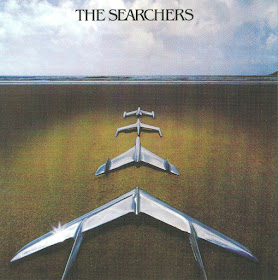 The Searchers’ trademark jangly-pop sound was tailor-made for the new wave ‘80s, and their ‘60s rock pedigree should have served them well in the new decade, but an audience was hard to find in spite of the overall high quality of the Searchers’ self-titled 1979 album. Take, for instance, the band’s cover of the Will Birch/John Wicks gem “Hearts In Her Eyes,” as delightful a slab of shimmering power-pop as will ever melt your ears. Pender’s wistful vocals are as smooth as honey and his and McNally’s cross-cutting guitars shine with the light of a thousand suns as the rest of the band joyfully bangs along with reckless aplomb. Wicks recorded the song a year later for the Records’ sophomore album, and while both performances will heal your soul, when released as a single, the Searchers’ version failed to move the needle at all.

The only other single released from the album – the kinetic “It’s Too Late” – also failed to chart in spite of its delicious start/stop dynamic, bouncy harmony vocals, and infectious melodic hook. The performance sounds like a new wavish take on British rockers Argent (with a dash of the Zombies, perhaps…), the band coming full circle artistically while delivering a solid radio-ready ‘should-have-been-a-hit’ that easily trounces rivals, er…contemporaries like the Babys, Elvis Costello, Joe Jackson, Split Enz, Squeeze, the Rezillos, the Undertones, the Tourists, the Knack, and the Cars…all of which released similar ‘60s-flavored power-pop LPs during the year. The band’s cover of Nick Lowe’s transcendent “Switchboard Susan” (penned by his pub-rock pal Micky Jupp) is more languid and lusty than Lowe’s original and falls short of the mark only because Lowe’s reading is so definitive.

The ignorance of the record-buying public notwithstanding, there’s a heck of a lot of great music to be found on The Searchers. “Feeling Fine” is an upbeat rocker with downbeat lyrics about a lost love, the song’s protagonist lying to himself above the din of twangy guitars and propulsive drumbeats. A cover of Tom Petty’s “Lost In Your Eyes” takes the song into the stratosphere, Pender’s echoed vox achieving an ethereal tone while guest Bob Jackson’s gorgeous piano underlines the song’s pathos. The band does Dylan equally proud, a cover of the Scribe’s “Coming From The Heart” provided a heartfelt reading of the lyrics above lush instrumentation. Among the band’s few original tunes, “Don’t Hang On” offers a rockabilly heartbeat with the soul of the performance fueled by bassist Frank Allen’s jaunty vocals while “This Kind of Love Affair” buries Pender’s vocals beneath swirling guitar licks and heavy rhythms that do nothing to dislodge the song’s undeniable melodic hook. 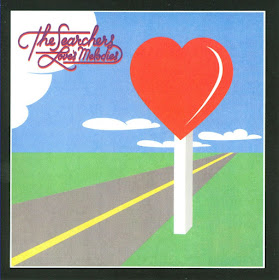 In spite of its feeble chart showing, The Searchers evidently garnered enough critical acclaim that Sire put the band back in the studio for a second shot at the brass ring. Released in the U.K. as Play For Today and stateside as Love’s Melodies in 1981, the album displayed the same incredible mix of inspired cover tunes and timely originals as its predecessor. The album is best-known for its lead-off single, a cover of Ducks Deluxe’s “Love’s Melody.” Written by that band’s Andy McMasters – a skilled songwriter in a band that included similar major talents in Sean Tyla and Nick Garvey – the Searchers imbue the song with a larger-than-life performance, Pender’s lovelorn vocals teetering atop lush instrumentation and supported by lofty backing harmony vocals and Billy Adamson’s ricocheting snare-drumbeats. The band’s original “Another Night” was the album’s second single, a somewhat atypical choice of songs with skewed guitars, chaotic harmonies, and angry drumbeats propelling an otherwise wiry rocker.

Much like its predecessor, Love’s Melodies/Play For Today offers a plethora of solid cross-genre performances all anchored by the band’s innate sense of melody and the twin jangle-pop guitars of Pender and McNally. The album’s opening track, “Silver,” is as maximum ‘new wave’ as a band could crank out at the time, the song challenging similar outfits like Blondie, the Rubinoos, or Katrina & the Waves with a delightfully 1960s-era pop/rock vibe comprised of glimmering guitar strings, on-point harmonies, and solid percussion work. “Radio Romance” comes courtesy of the band’s pal Will Birch (The Records), the song seemingly handcrafted for FM airplay with taut fretwork, whipsmart lyrics, and a fierce jangly sonic vibe that could blast effortlessly above the din from a car radio. The Searchers’ choice of cover songs are among the best I’ve seen and heard in four-and-a-half decades of poring over rock ‘n’ roll vinyl and they picked some tasty treats for Love’s Melodies/Play For Today, starting with John Fogerty’s “Almost Saturday Night.”

Performed with the same sort of ramshackle charm as the original, Pender’s vocals on “Almost Saturday Night” mimic those of Fogerty’s original as the band lays down a mighty rhythmic bedrock embroidered upon by twangy guitarplay. Big Star’s “September Gurls,” recorded years before the Chilton revival, captures the magic of the original with echoed harmonies and melancholy guitars matched by rollicking percussion. Whereas The Searchers disc included bonus tracks in the form of alternative mixes of “It’s Too Late,” “Love’s Melody,” and “Silver” that display a different facet of the band’s talents, the bonus tracks appended to Love’s Melodies include the engaging band original “Changing,” the B-side to the album’s first single, while John Hiatt’s “Back To The War” is an electrifying take on a then-obscure songwriter. Released as a B-side to the “Another Night” single, the song’s angular dynamics and Pender’s vocal approach make it the most ‘new wave’ sounding tune they had recorded. The band liked Hiatt’s material so much that they also recorded his “Ambulance Chaser,” unreleased until now, the song a definite stylistic throwback with charming vocals and distinctive instrumentation that would sound more at home in 1968 than 1980.


With The Searchers and Love’s Melodies/Play For Today, the band reached the creative pinnacle of their lengthy career. More than mere interpreters of song, the Searchers imbued every recording with their own unique sound – gorgeous vocal harmonies, innovative use of twelve-string guitar, driving rhythms – making each performance their own, no matter who wrote the song. It’s no different with these two albums, the band rising to the occasion to deliver a pair of power-pop treasures that, while sorely overlooked at the time, nevertheless proved why the Searchers were a major influence on everybody from the Byrds and Big Star to Tom Petty and R.E.M. If you’re a fan of any of these bands, you owe it to yourself to discover the Searchers. Grade: A (Omnivore Recordings, released December 8, 2017)