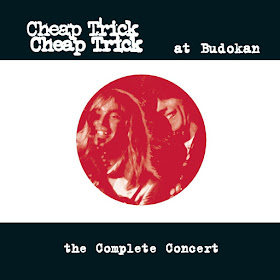 It wasn’t really a gamble, that month in 1978, when Cheap Trick landed on the foreign soil of Japan for the first time for two nights of shows, but rather as close to a sure thing as Cheap Trick had experienced. Ignored commercially by all but a loyal base of fans after three critically-acclaimed albums in the United States, Cheap Trick were a big deal in the land of the rising sun, earning a pair of gold albums and a slew of hit singles.

The Japanese performances, recorded for a future album release in that country, were considered a stopgap measure for the band’s most successful market while the Illinois boys finished up what was to be their fourth domestic release, Dream Police. Fate being what it is, however, Cheap Trick’s At Budokan album became one of the best-selling import albums in the U.S. before finally being released domestically by the band’s label. Fueled by the hit single “I Want You To Want Me,” millions of American teens viewed Budokan as a musical mecca, Cheap Trick their new rock ‘n’  roll idols, driving At Budokan to multi-platinum sales and status as one of a handful of classic live albums.

Some twenty years later, Cheap Trick are still plugging away, sounding as fresh and energetic as they did in the ‘70s. To commemorate the Budokan concerts, the performances recorded those nights have been reissued on CD for the first time as a “Deluxe 20th Anniversary Edition.” Nineteen digitally remastered cuts presented in the original set order recreate a complete Budokan performance with improved sound and clarity, while a couple of neat video clips to be viewed with your computer are thrown in to bring the set into the modern age. What more can really be said about the songs performed by Cheap Trick those nights? Many have become timeless classics, cuts like “Surrender,” “Southern Girls,” “Come On, Come On” and, of course, “I Want You To Want Me” becoming part of our shared musical vocabulary.

Primarily a band that came across better on stage than in the studio, At Budokan: The Complete Concert captures the energy and charisma of one of the best rock bands of all time. The inclusion of additional material from the original shows improves upon the original LP release, providing a more authentic document of the band at the time. The release of At Budokan: The Complete Concert on CD allows Cheap Trick fans to finally fill out their collections with this important slice of rock history. (Legacy Recordings, released April 28, 1998)

Buy the CD from Amazon.com: Cheap Trick’s At Budokan: The Complete Concert