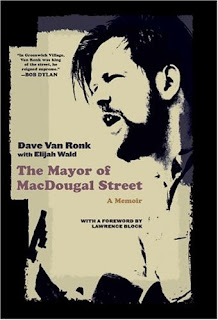 He’s not a household name, although his influence on folk music falls just short of Woodie Guthrie and Bob Dylan. A charismatic performer and tireless champion of traditional folk and blues, Dave Van Ronk was one of the leading lights of the early ‘60s folk movement that was based in New York City’s Greenwich Village.

The Mayor of MacDougal Street is Van Ronk’s infectious and friendly memoir. Written with help from, and completed after his death in 2002 by music historian Elijah Wood, Van Ronk spins tales and unravels yarns that document his evolution from a musically-obsessed high-school dropout to his role as a mover and shaker in the admittedly small, insular world of folk music. A self-taught musician, Van Ronk launched his career in the early ‘50s as a died-in-the-wool traditionalist, playing guitar and banjo in jazz and Dixieland bands in New York and New Jersey.

Van Ronk quickly figured out that this road led towards starvation, so he cast aside his “carefully cultivated jazz snobbery” and taught himself the finger-picking guitar style practiced by folk musicians. By mid-decade, he was a Washington Square regular, playing in the park with musicians like Barry Kornfeld and Dick Rosmini. His weekly (free) performances in the park led to marginally paying gigs in the clubs and coffeehouses around the Village and, eventually, to record albums and a fair degree of notoriety.

Van Ronk and Wald do an excellent job of capturing the gradual build-up, short “boom” period and eventual decline of the Village folk scene of the ‘60s. Van Ronk explains the importance and influence of leftist politics on folk music, the roots and history of the genre and introduces many of the major players. Along the way, he shares memories of talented musicians that he played alongside and those that he mentored (or those that mentored him). Bob Dylan, Tom Paxton, Phil Ochs, Odetta, Mississippi John Hurt, Joni Mitchell and Rev. Gary Davis are among those friends and colleagues Van Ronk talks about.

Van Ronk colors the Greenwich Village folk scene with many details and memories, discussing folk music publications like Broadside and Caravan that he wrote for, as well as the influence of visionaries like Moe Asch, Alan Lomax and Harry Smith on the genre. The style here is conversational and lighthearted, Van Ronk’s self-effacing humor and refusal to take his experiences too seriously making his memoirs an enjoyable and informative read.

The Mayor of MacDougal Street is vital not only for those who love folk music, but also for those of us who enjoy music at all. The styles performed by Van Ronk – traditional folk and folk blues – are deeply intertwined with rock, rap and country music to the point where it’s difficult to separate them. Dave Van Ronk understood this musical cross-pollination decades ago and his career of almost 50 years is a testament to the enduring nature of folk music and its roots. (Da Capo Press, 2005)

Buy the book from Amazon: Dave Van Ronk’s The Mayor of MacDougal Street