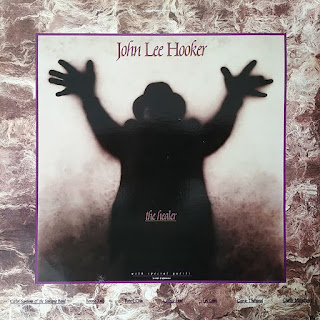 By 1989, blues legend John Lee Hooker was entering the final chapter of an impressive career that had endured for over 50 years. Hooker scored his first chart-topping R&B hit in 1948 with “Boogie Chillen”, and he visited the charts sporadically over the years with songs like “Crawlin’ King Snake”, “I’m In the Mood” (a Top 30 pop hit!), and “Boom Boom”. He’d recorded better than 100 albums over the course of his career, including collaborations with young blues bands like the Groundhogs and Canned Heat and guest appearances on albums by artists as diverse as Peter Townshend, Jim Morrison, John P. Hammond, and Miles Davis. Clearly, John Lee had little left to prove…

Enter Mike Kappus, a legendary artist manager and agent. Kappus became a licensed booking agent in 1970 at the age of 19, promoting shows while attending the University of Wisconsin. Moving to San Francisco in 1976, he founded the Rosebud Agency, signing guitarist Michael Bloomfield and singer/songwriter John Hiatt the first day he opened the doors. Over the ensuing years, Kappus was instrumental in launching the careers of artists like George Thorogood & the Destroyers, Robert Cray, and Los Lobos and he also worked with veteran music-makers like Muddy Waters, Albert Collins, Captain Beefheart and … you guessed it … John Lee Hooker. Kappus dabbled in record production as well, receiving ‘Executive Producer’ credits on albums by Hooker, Robert Cray, J.J. Cale, Duke Robillard, and Loudon Wainwright III, among others.


Kappus helped launch the HART (Handy Artists Relief Trust) Fund for The Blues Foundation in 2000, providing financial assistance to blues musicians in need, and he was inducted into the Blues Hall of Fame in 2014. As Hooker’s manager and agent, he envisioned a late-career “comeback” album by the 73 year old bluesman, assisted by some of the talents whose contact info stuffed his Rolodex. He found a like-minded ally in Stephen Powers, the founder and president of Chameleon Records, who he knew from his early days in Wisconsin. Chameleon had recently purchased the long-dormant Vee-Jay Records label and had reissued several of Hooker’s earlier Vee-Jay albums with some success so, after a little coaxing, Powers agreed to release The Healer.

Recruiting blues guitarist Roy Rogers from Hooker’s Coast To Coast Band to produce the album, Kappus enlisted eager volunteers like guitarists Carlos Santana, Bonnie Raitt, George Thorogood, and Robert Cray to join Hooker in San Francisco’s Russian Hill Recording Studios in September 1989. Hooker’s basic backing band in the studio was comprised of Rogers on guitar and drummer Scott Matthews, with members of Canned Heat and Los Lobos sitting in on some tunes. The album’s tracklist featured material from Hooker’s deep and wide song catalog, with the new title track co-written by the blues legend along with Santana, Rogers, and keyboardist Chester D. Thompson.

With Carlos’s guitar weaving a Latin-flavored tapestry of sound and the rhythm section establishing a strong rhythm with timbales, conga, and drums, the title track kicks off The Healer with a jazzy, exotic vibe that’s only enhanced by Hooker’s smoky, almost-muted vocals and Thompson’s nuanced keyboards. Santana’s mid-song solo soars out of the mix, the guitarist clearly enjoying himself (he’d enjoy a late-career revival of his own a decade later, with 1999’s Supernatural album). Hooker’s duet with Bonnie Raitt on “I’m In the Mood” earned the bluesman his first Grammy™ Award (for “Best Traditional Blues Recording”). The combination of the two old friends, a darkened studio, and an erotic vibe sizzles like steak on the grill, with sultry vocals and the red-hot coals of Raitt’s slide-guitarwork. Hooker originally released the song in 1951, enjoying a #1 R&B chart hit, but the ‘89 version is superior in sound and performance. 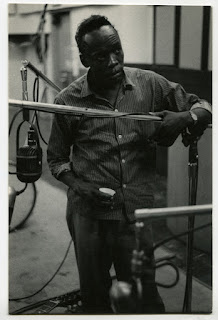 “Baby Lee” was the B-side of Hooker’s 1956 R&B hit “Dimples” and, revisited for The Healer with Robert Cray on guitar, the performance is so laid-back that you can’t tell if it’s coming or going. The song’s strong rhythm overwhelms Hooker’s slight vocals, but Cray’s subtle fretwork rides along Richard Cousins’ fluid bass line to create a cool, bluesy ambiance. By contrast, Hooker and his old friends from Canned Heat (their 1971 collaboration Hooker ‘n’ Heat is a blues-rock treasure) raise a bit of dust with “Cuttin’ Out”. Henry Vestine’s guitar licks rip ‘n’ roar alongside Hooker’s spoken-sung vocals while the rhythm section of bassist Larry Taylor and drummer Fito de la Parra establish a swinging booger-rock groove. As icing on the cake, blues harp legend Charlie Musselwhite rages on the harmonica in counterpoint to the rhythm, making for an invigorating performance.

Hooker is backed by Los Lobos for “Think Twice Before You Go”, the entire band pitching in and creating a low-slung sound above which Hooker croons his vocals. With David Hildago’s accordion in the background, it really sounds like a Los Lobos cover of a vintage Hooker song, with the bluesman guest-starring on vocals … and that’s not a bad thing! Probably the oldest song on The Healer, “Sally Mae” was the flipside of Hooker’s first hit, “Boogie Chillen’”. He’s accompanied here by George Thorogood, who’s forged a decades-long career from his Hooker influences, but the guitarist plays it straight here, reverent to the material, garnishing Hooker’s smooth-knit vox rather than stomping on them.

“That’s Alright” defines the difference between the Detroit school of blues (i.e. Hooker) and the better-known Chicago style … the song establishes a strong, stuttering rhythm endemic to the Detroit style, courtesy of drummer Matthews and bassist Steve Ehrmann, and then layers on Rogers’ ringing guitar tones and Musselwhite’s mournful harp notes beneath Hooker’s moaning, droning vocals. Whereas Chicago blues often relies on an up-tempo swing with both rhythm and guitar, Detroit blues is heavier and more atmospheric, often as thickly-constructed as night in a Louisiana swamp. Hooker breaks out his National Steel guitar for the haunting “Rockin’ Chair”, the solo performance echoing the ghosts of the Mississippi Delta while displaying his fractured, jagged guitar style. “No Substitute” is in a similar country-blues vein, Hooker wielding a twelve-string like Big Joe Williams, while the previous “My Dream”, with Canned Heat’s rhythm section, is a soulful ballad that displays a more constrained side of John Lee’s talents.

The Healer eventually sold better than a half-million copies, an unheard of number in the blues world, and it helped launch a roots-music revival that continues to this day. Quoted in British music critic Charles Shaar Murray’s John Lee biography, Boogie Man, Kappus states that “The Healer had a major impact on the entire genre of roots music. The door had been cracking open for years for roots music with George Thorogood and Stevie Ray Vaughan and Robert Cray, but here was an older artist, one of the originators, actually having success on the level of a contemporary rock star.” Recently reissued on CD and vinyl by Craft Recordings after being out-of-print for over a decade, The Healer was pressed on 180-gram vinyl at Quality Records Pressing with lacquers cut by award-winning engineer Bernie Grundman. Although the new reissue doesn’t include any bonus tracks (according to Murray, several tracks were recorded at the time and used on subsequent albums like Mr. Lucky), it’s just good to have this groundbreaking album available once more.


If The Healer represented the final chapter of John Lee Hooker’s lengthy career, it was really just the opening paragraph. Using the album’s guest-heavy format as a blueprint, Hooker went on to write a hell of a closing for his story with subsequent albums like 1991’s Mr. Lucky (which included Santana, Keith Richards, and Albert Collins); 1992’s Boom Boom (with Jimmie Vaughan and Robert Cray); and 1995’s Chill Out (with Santana and Van Morrison), all of them produced by Rogers and overseen by Kappus. The Morrison-produced Don’t Look Back (1997) was Hooker’s final studio album, earning him his third and fourth Grammy™ Awards.

Hooker was inducted into the Blues Hall of Fame in 1980 and the Rock and Roll Hall of Fame in 1991. He also received the Grammy™ Lifetime Achievement Award in 2000. Passing away in June 2001, John Lee Hooker went out on top, enjoying more than a decade of critical and commercial success (and long-overdue monetary reward) as well as numerous accolades and the respect and adoration of his peers. His career was often overshadowed by the successes of his contemporaries, but after better than half a century in the blues business, John Lee became a bona fide “overnight success”… and it all began with The Healer. (Craft Recordings, reissued October 28th, 2022)

Buy the CD from Amazon: John Lee Hooker’s The Healer