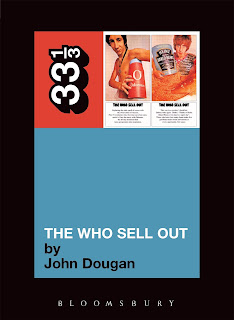 The Who Sell Out is, undeniably, one of the legendary rock band’s most adventuresome yet lighthearted of albums. A tribute to the notorious pirate radio stations that operated off the coast of England during the mid-‘60s, The Who Sell Out mixes Pete Townshend’s uncanny ear for melody (songs like “Glittering Girl” and the Top Ten hit “I Can See For Miles”) with made-up jingles and fake radio commercials that echo the sounds then being heard by U.K. teens from stations like Radio London.

John Dougan’s The Who Sell Out

Author John Dougan attempts to dissect and analyze this classic album with his book The Who Sell Out, part of Continuum’s rightfully acclaimed 33 1/3 series of books. The result of Dougan’s efforts is a delightful trip in the wayback machine to the swinging ‘60s of London and a British music scene dominated by the Beatles, the Rolling Stones, the Kinks, and the Who. Dougan sets the stage for the story with a personal recollection, talking about the differences between him and his father, not only in their musical preferences, but also in their relative degree of musical fanaticism. Whereas family and obligation caused his father to put aside music as an adult, the younger Dougan – not unlike many of us children of the ‘50s – became hopelessly addicted to rock ‘n’ roll, an affliction that the author has obviously carried to the present day.

It was his unquenchable thirst for new music … a trait also shared by many collectors and critics … that led Dougan to discover the British Invasion and, subsequently, the Who. In a strange twist of fate, however, it wasn’t until he was in his 20s that this hardcore Who fan finally added a copy of The Who Sell Out to his personal library. Such are the fortunes of the music fan, and when Dougan describes living in a “cultural backwater” in Massachusetts, many of us can identify. I remember living in a rural suburb of Nashville, my lifeline to the outside world consisting of copies of Creem magazine, dog-eared by constant reading, and the irregular packages of promo albums sent for review by my editor Rick Johnson at Sunrise.

Dougan lays the groundwork for the recording of The Who Sell Out by going into the history of the UK pirate radio scene with some detail. I find this aspect quite fascinating, the thought that a handful of illegal offshore stations like Radio London and Radio Caroline could have such a cultural impact is mind-boggling. There was nothing like this phenomenon in the United States – pirate stations stateside were erratic, disappearing frequently, and were greatly limited by America’s size and geography. Dougan provides interesting details on the history of England’s state-sponsored media, the BBC’s reluctance to embrace rock ‘n’ roll an important deciding factor in the creation and popularity of the U.K. pirates.

Dougan’s discussion of ‘60s-era art and art theory is equally fascinating, his exploration of the influence of these factors on Pete Townshend’s work ties together disparate snapshots previously provided by the band’s biographers like Dave Marsh and Richard Barnes. No artist lives in a vacuum, and Townshend was certainly no exception, and the opportunities to immerse one’s self in radical and thought-provoking cultural scenes during the era were seemingly endless. There was an almost unbelievable co-mingling of art and commerce in those days, unthinkable by today’s “alternative” mindset, but much of what we think of as classic works from the ‘60s were fresh, original and unabashedly commercial.

It was from this miasma of art and commerce that Pete Townshend conceived of The Who Sell Out. Townshend’s aim was not, as the album’s title implies, to actually “sell out” but rather to offer listeners, as Dougan describes it, “a celebration of the zeitgeist, a joyous reaffirmation of the discrete cultural elements that had defined British postwar popular culture and the Who as a pop art musical experience.” Townshend correctly found British pop culture to be less cynical and more positively-oriented than that of America, and it’s true that the British have, and continue to embrace a much wider range and diversity of cultural media.

Dougan recounts the creative and technical obstacles that were overcome during the making of The Who Sell Out and, sadly, tells of the album’s immediate commercial failure. A bit too cerebral, perhaps, for mainstream audiences, the album’s fortunes waned after the last chords of “I Can See For Miles” disappeared from the charts. Undaunted, the Who would go onto greater triumphs and tragedies but, strangely enough, The Who Sell Out continues to hang around, 40 years after its initial release. An intriguing and many-layered work of art, the album continues to win converts and influence people long after its “sell by” date has expired. Just as importantly, Dougan outlines how the album was a vital work, aiding the Who’s transformation from a chart-topping pop band into a legendary rock band.

The Who Sell Out is a worthy addition to the 33 1/3 series. Dougan’s prose is lively and informative, his insights well-considered and crafted by spending most of a lifetime living with and considering this often overlooked album. His account of the cultural forces that helped shape Townshend’s work is immensely important in a historical context, and I can see myself referring back to this tome in the future. Unlike many of the well-written books in the 33 1/3 series, Dougan’s The Who Sell Out provides a textural framework that actually enhances the listening experience rather than merely supporting an album’s critical credentials. Dougan’s efforts made a fellow Who fanatic listen to The Who Sell Out with fresh ears, and for that I thank him! (Continuum 33 1/3 series, published September 15th, 2006)

Buy the book from Amazon: John Dougan’s The Who Sell Out