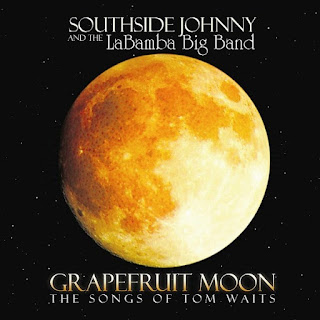 As a songwriter, Tom Waits seems to be undergoing a sort of popular revival these days. During the spring of 2008, actress Scarlet Johansson released her collection of Waits songs; produced by TV On The Radio’s Dave Sitek, Anywhere I Lay My Head was a collection of textured fantasy-pop more akin to polished early ‘80s studio concoctions like the Cocteau Twins than to Waits’ gritty, world-weary portraits in sound. Sitek’s production removed too many of the sharp edges from Waits’ work, and I for one don’t believe for a minute that Johansson, who just began her singing career a couple of years back, was thoroughly invested and in love with the material … no matter how many hipster critics say it’s so.


Now it’s Southside Johnny Lyons’ turn, and with Grapefruit Moon, the Asbury Park veteran takes a completely different tack on the Waits songbook. Backed by LaBamba’s Big Band, fronted by his New Jersey pal Richie “LaBamba” Rosenburg, Lyons has reinvented these Waits songs as grand jazzbo antiques with big band arrangements and lots of horns up front in the mix. Channeling both Duke Ellington and Woody Herman, Lyons’ gruff, slightly-worn voice sounds good on both the slow-crooned ballads and the album’s rambunctious up-tempo flare-ups, while the band’s overall excellent performance is integral to the success of the material. LaBamba runs a damn tight ship, and these boys are playing their hearts out … sounding uncannily like a white-suited-and-gloved throwback to a kinder, gentler era.

It’s the songs that matter, though, and Grapefruit Moon doesn’t duplicate any tunes from Johansson’s casual gaze through the Waits canon. Lyons digs a little deeper, reaching as far back as Waits’ 1973 debut album. The result is an interesting and eclectic choice of songs. “All the Time In the World” offers a forceful vocal performance, more closely resembling Lyons’ typical R&B stomp, while the band delivers a very cool and slightly atonal ‘60s-styled movie soundtrack sound that is complimented by Glenn Alexander’s ripping guitar solo.

“Tango ‘Til They’re Sore” comes the closest to mimicking Waits’ original version, with guttural vocals and discordant instrumentation, and the songwriter himself drops by for a duet on the lively “Walk Away And Start Over Again.” The two singers’ personal styles might be wildly different, but here they mesh together nicely, with sparse instrumentation, led by manic piano, supporting the song’s odd meter and syncopated rhythms. And so it goes, Lyons knocking each one out of the park, even oddball pitches like “New Coat of Paint.”