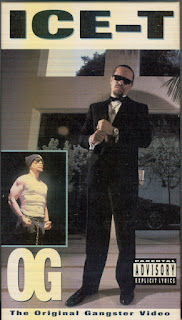 Ice-T – O.G. The Original Gangster (Warner Reprise Video)
Sure, we all know that Ice-T is fly, the baddest rhyming rap mutherfucker on the scene. But T is also a socially conscious satirist and political commentator of the first order. T’s second full-length home video release, O.G. The Original Gangster, is a collection of two dozen music videos, various conversations and commentary, and miscellaneous footage all tied in with the recent Ice-T album release of the same name. You’ll find the sex rhymes and funky raps here, but what you’ll see the most is T’s brave socio-political insight on songs such as “The Tower,” “Escape From the Killing Fields,” “Body Count,” and the wickedly scatological “Ya Shoulda Killed Me Last Year.” Go get ‘em Ice!

The video also includes musical insight into Ice T’s unique streetside experiences, recounted in rhymes like “Home of the Body Bag” and “Midnight.” With the force of his lyrics, T manages to transport the listener to East L.A. and right into the face of the poverty and violence found there. As one of the elder spokesmen of rap, Ice-T has been instrumental in fighting censorship of the music as an art form, appearing on numerous teevee talk shows and on radio. In his music, as in life, T always walks it like he talks it … no bullshit, no compromise. The O.G. The Original Gangster video is the same way. Though it doesn’t do much in the way of furthering video as a musical art form, it does manage to present the powerful work of Ice-T, the artist, in a visual format. On that level, it succeeds quite well.

Ice Cube – Death Certificate (Priority Records)
Casual fans who may have discovered Ice Cube from Boyz In the Hood, believing him to be the proverbial “bad kid with good intentions,” have reacted with more than a bit of dismay since the release of Cube’s latest sides, represented by Death Certificate. Too damn bad, I say; if you’re silly enough to venture into these waters, then why worry about the tide. After all, Cube, one of the leading proponents of “gangsta rap,” has never shied away from controversy; this disc is no exception. With this collection of 22 righteous tunes, Ice Cube slings his razor-sharp lyrical barbs at his former bandmates in N.W.A. and their Jewish manager; he also comes down on women, other blacks, and even Korean grocers. To be sure, some of the hatred which flows from these rhymes seems a bit misplaced, and could be directed into a more positive milieu (see what Ice-T has done in this area, for instance), but Ice Cube remains one of the genre’s most outrageous, influential, and articulate spokespersons. 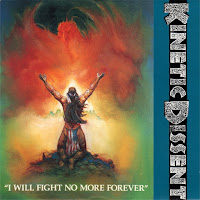 Haunted Garage – Possession Park (Metal Blade Records)
Next to these spud-boys, Gwar are a bunch o’ pansies and the Butthole Surfers mere choirboys. Haunted Garage are the new kidz on the (cell) block, thank you, tougher then leather, crankier than yer near-dead great grandpa, and nastier than a blocked rectum. Stinging guitars tossing out lightning-like riffs, guttural vocals spitting out tasteless, obscene lyrics, throbbing rhythms spelling out S-I-N … Haunted Garage deliver the goods, all blood ‘n’ guts ‘n’ questionable sanity spewing out bile and noise and Satan with a capital ‘S’! C ya in hell, kiddiez!!!

Kinetic Dissent – I Will Fight No More Forever (Roadrunner Records)
As commercial rock ‘n’ roll becomes wimpier and even more bland … music made for geldings by eunuchs … hard rock, heavy metal, thrash – whatever you want to call it – is putting balls back into the music. Poetry, too, as I Will Fight No More Forever will attest to. Taking their title from Nez Perce Indian Chief Joseph’s famous speech, Kinetic Dissent infuse the entirety of this disc with thoughtful lyricism and hard-rocking performances. Delivering tasty thrash with musical and lyrical depth which belies any pre-conceived notions of the genre, Kinetic Dissent place themselves firmly among the forefront of the underground rock scene that is making waves (and winning fans) worldwide. 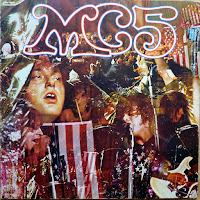 MC5 – Kick Out the Jams (Elektra Records)
Tho’ I came to the Motor City a decade too late to be a part of the crowd who worshipped before the altar of the holy ‘70s trilogy of Iggy/MC5/Nugent, I did manage to hang out down at the New Miami (located in the infamous Cass Corridor of East Detroit) enough nights to see what influence they had on their children. With this CD reissue of Kick Out the Jams, you can relive those fabulous, acid-soaked early ‘70s nights at the Grande Ballroom (where this LP was recorded). The voice of the Midwest’s White Panther Party, managed by radical iconoclast John Sinclair, MC5 mixed the leftist political rhetoric of the times with a bone-crunching rock sound that was equal parts late ‘50s R&B and roots rock and 1960s-era psychedelia. This disc isn’t just a historical curiosity, though, but an important rock ‘n’ roll milestone. MC5 were one of the first ‘heavy metal’ bands around, mixing punkish attitude with loud, LOUD music. Along with other “oddities” of the era like the Velvet Underground and Iggy and his posse, MC5 can be considered a precursor to many of those who followed.

All reviews originally published in the ‘Wax Works’ section of the Radical Pizza zine, February 1992
Rev. Keith A. Gordon at Friday, November 18, 2022
Share