Soft Machine’s Live at the Paradiso on vinyl! 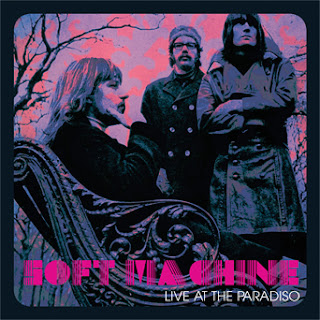 There’s no shortage of live recordings available from prog-rock pioneers Soft Machine. Even for a band that changed its line-up of musicians like a lot of people change their socks, there’s likely a Soft Machine live disc for just about any incarnation of the band you care to hear. Live at the Paradiso, scheduled for February 3, 2017 release on vinyl by Real Gone Music, captures the band as a three-piece featuring bassist Hugh Hopper, drummer/vocalist Robert Wyatt, and keyboardist Mike Ratledge.

Live at the Paradiso showcases a band kicking out the jams in a true sonic assault; in the liner notes Hopper recalls “I do remember playing incredibly loud, Mike on fuzz organ and me on fuzz bass, both through hundred-watt Marshall amps.” The tracklist features material from the band’s upcoming album Volume Two, released roughly six months after this March 1969 performance and created by the same band roster. This live set has been widely bootlegged and was originally released on CD in 1995 (reissued in 2015) and on vinyl, briefly, in 2002. Real Gone Music is reissuing Live at the Paradiso as a limited edition of 1,000 copies on “soft” purple vinyl, so collectors – start saving your pennies!

Soft Machine was formed in 1966 on Canterbury, England by Wyatt and Ratledge with guitarists Daevid Allen and Kevin Ayers. This is the line-up that recorded the band’s astounding 1968 self-titled debut LP, which featured a ground-breaking mix of psychedelic rock and free-jazz which served as a precursor to both progressive rock and jazz-fusion in the 1970s. Originally known as ‘The’ Soft Machine (the definitive dropped a couple years later), the band was heavily involved in the early U.K. rock underground scene that revolved around London clubs like the UFO and the Speakeasy.

The band broke up in September 1968, but re-formed in December sans Ayers, who went on to pursue a successful solo career and Allen, whose visa problems stranded him in Paris, where he formed the equally-influential outfit Gong with partner Gilli Smyth and guitarist Steve Hillage. Soft Machine soldiered on with the addition of Hopper on bass, expanding their sound to include horns and strings on subsequent albums like 1970’s Third and 1971’s Fourth. Soft Machine would influence a generation of more successful prog-rock bands like King Crimson, Yes, and ELP. Live at the Paradiso captures the band near the peak of its creative excess, and would make a fine addition to the vinyl collection of any prog-rock fan.

Buy the vinyl from Amazon.com: Soft Machine's Live at the Paradiso
Posted by Rev. Keith A. Gordon at Thursday, December 22, 2016