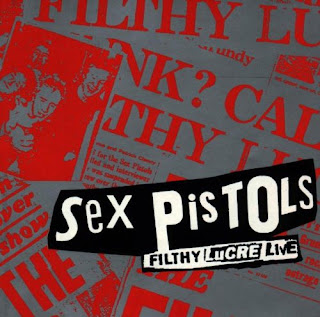 For members of bands like the Clash or the Sex Pistols – arguably the two most important punk bands of the 1970s –  it hasn't been easy living down the legend that’s been built up around them these past 20 years like a bloody albatross around the neck. While the Clash finally melted away into mediocrity with sub-par versions of the band, the Sex Pistols instead self-destructed in the white heat of scandal, hype, death, drugs and violence.

Although Johnny Rotten (née Lydon) built a solid rep as the frontman of Public Image, Ltd., there was always that “unfinished” Sex Pistols business lurking around the corner. For quite a while, throughout the ’80s, it seemed as if everybody but the band were making money, as their illustrious former manager, various record labels and numerous t-shirt and sticker companies marketed Sex Pistols products. It must be particularly vexing to be a legend when you’re not getting your share of the pie.


Thus this year’s dubious Sex Pistols reunion tour, celebrating their twentieth anniversary, and the resulting live CD. Making no bones about their intentions, the newly reformed Sex Pistols polished up their axes and polished off musical chestnuts like “God Save the Queen” and “Pretty Vacant” for a whirlwind “Filthy Lucre” tour of Europe and the United States, a performance trail expressly designed to financially soften their descent into retirement. Although I find it all perfectly hilarious – young punks these days bitch far too often about which bands have “sold out” and what’s real punk and what’s not – here are the godfathers of the entire damn scene making an unabashed grab for the cash.

I held reservations about Filthy Lucre Live, however, until I slapped this mean little puppy onto the box and cranked up the sound. Somewhere along the line during the past two decades, the Sex Pistols have actually learned how to play, and their old punk standards take on new potency when stripped of their amateurish original performances. Cuts on Filthy Lucre Live like “New York,” “EMI,” “Holidays In the Sun” and “Anarchy In The U.K.,” as well as the aforementioned pair of Pistols’ classics, sound every bit as vibrant and exciting in this live setting as they ever have. Johnny Rotten’s wailing vocals sound as off-kilter as they always have, his snarling humour at his own expense (and the audience’s) merely part of his longstanding public identity. The band – guitarist – sound like they’ve been playing together for the past 20 years rather than apart, their timing, energy, and power unmatched by bands half (or even a third) their age.


Filthy Lucre Live sounds damn good, and although I doubt that the fearless foursome could create new material with the strength of that on which their legend rests, it’s good to hear these songs, and the band, once again. Score one for the old timers... (Virgin Records, released July 27, 1996)