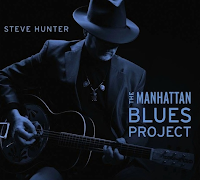 Steve Hunter first made a name for himself as a member of Mitch Ryder's rough 'n' tumble early 1970s band Detroit. As a literally unknown talent at the time, the young guitarist brought a new dimension to Ryder's sound, and while recording that band's 1971self-titled debut album, Hunter became friends with producer Bob Ezrin. This opened a wealth of possibilities for the musician, who would subsequently tour and record with people like Lou Reed, Alice Cooper, Peter Gabriel, and David Lee Roth, among many others.

As guitar talents were expected to do during the '70s, Hunter launched his solo career in 1977 with the Swept Away album, produced by Ezrin. As the guitarist continued to make a living playing sessions and touring, he would release a handful of solo albums, including The Deacon in 1989 (with a young Jack White on drums) and Short Stories in 2008. After finishing up a tour with Alice Cooper in 2011, Hunter decided to take some time off the road to write and record a new album, his fifth solo work, The Manhattan Blues Project.

Rock guitarists often return to their "blues roots" when they have nowhere else to go, but in Hunter's case, it's an honest circling around to where he began in the first place. Growing up in Illinois, Hunter played with bands as a teenager, and learned the guitar by listening to records from talents like B.B. King, Albert King, and Michael Bloomfield. When he was plucked from obscurity to play alongside the great Mitch Ryder, Hunter already had his schooling in blues, soul, and rock 'n' roll, so it should come as no surprise for him to return to his roots and record an album of mostly-original new material in a blues vein. The only two covers on The Manhattan Blues Project are an instrumental version Peter Gabriel's "Solsbury Hill" (Hunter played on the original recording) and Marvin Gaye's soul classic "What's Going On."

The Manhattan Blues Project was produced by Hunter and he performed with a few studio guests like guitarists Joe Satriani, Marty Friedman, Joe Perry of Aerosmith, and Michael Lee Firkins as well as bass guitar virtuoso Tony Levin (King Crimson, Peter Gabriel) and film superstar Johnny Depp, who has been known to strap an axe on from time to time. A love letter to the Big Apple, in a press release for The Manhattan Blues Project Hunter says "this album has been inside me trying to get out for a long time. I wanted to show the other side of New York, thee soulful side, plus it also says a lot of what I have always wanted to say on guitar."

You can check out the electronic press kit video for The Manhattan Blues Project below and the album is available through Hunter's CD Baby page.