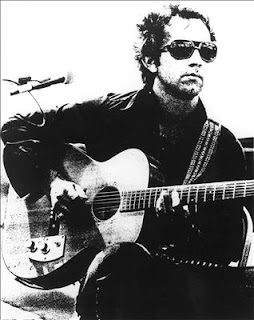 John Weldon Cale, known to hundreds of thousands of hardcore fans worldwide as "J.J. Cale," passed away on Friday, July 26, 2013 of a heart attack. The influential blues-rock singer, songwriter, and guitarist was 74 years old.

A native Oklahoman, Cale got his start in music as a teenager playing honky-tonks in the Tulsa area, often in bands with his friend Leon Russell. Cale developed his own unique sound that incorporated blues, rock, and country influences with often folkish lyricism and laconic, understated vocals that often belied the complexity and intelligence of Cale's songs. Moving to Nashville in 1961, he joined the Grand Ole Opry's touring company as a musician but, after a couple of years of roadwork, he returned to Tulsa and reunited with Russell. The two would subsequently relocate to Los Angeles in 1964, where Cale would work as a studio engineer.

While in L.A., Cale released a number of singles for the Liberty Records label during the mid-1960s, including a version of his original song "After Midnight." None of the singles charted, and Cale once again returned to Tulsa to play music and write songs. When his old buddy Leon formed the Shelter Records label in 1969, Cale was one of the first artists he signed, but before J.J. could record his debut album, fate stepped in when Eric Clapton hit the Top 20 in 1970 with his version of the songwriter's "After Midnight."

Clapton's chart success raised Cale's profile and primed the pump for his 1972 debut, Naturally, which included his version of "After Midnight" (which rose to #42), and his only hit single, "Crazy Mama," which topped out at #22 on the Billboard Top 100 singles chart. Many fans and critics consider Naturally to be Cale's strongest album, which is hard to argue considering that aside from the aforementioned songs, it also includes the bluesy "Call Me The Breeze" (covered by both Lynyrd Skynyrd and Johnny Cash), "Bringing It Back" (later covered by Kansas), and "Clyde" (a 1980 hit for Waylon Jennings).

Cale followed up Naturally, which peaked at #51, with 1973's Really, which was partially recorded in Muscle Shoals, Alabama, and 1974's Okie, neither album bolstering Cale's commercial returns. Troubadour, released in 1976, would at least bring Cale back into the Top 100, although it would be his last album for three years, until the release of 1979's 5. Cale would receive another boost courtesy Mr. Clapton with the British guitarist scoring again with Cale's "Cocaine," taking the song to #30 and driving his 1978 album Slowhand to number two on the charts. Clapton would later cover Troubadour's "Travelin' Light" for his 2001 album Reptile, and Southern rockers Widespread Panic would cover the song for their 1988 album Space Wrangler.

This would be the blueprint for much of Cale's career, however…he would remain a well-respected cult artist who flirted with commercial success from time to time, seemingly remaining content to watch other artists score on the charts with his songs (and collect the royalties). Cale would continue to record sporadically throughout the 1980s and into the new millennium, chalking up a total of fourteen studio and one live album, his latest being 2009's Roll On. Cale collaborated with Clapton on 2006's The Road to Escondido, contributing eleven original songs and co-producing the album, which earned the pair Cale's only Grammy Award.