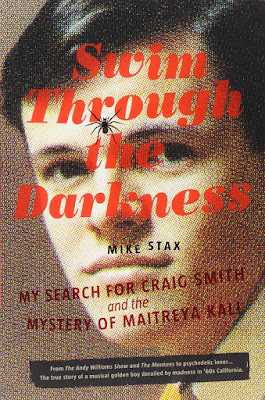 One could easily come to the conclusion that Swim Through the Darkness author Mike Stax is obsessed. For better than three decades now, Stax’s Ugly Things zine has been the ‘go to’ publication for the smart rock ‘n’ roll fan and collector. Published a couple times annually on average, each issue of Ugly Things is typically thicker than the phonebook of a medium-sized Rust Belt city and crammed with band profiles, artist interviews, and record reviews. Those aforementioned band profiles – sometimes spanning two or more issues and tens of thousands of words – display the sort of attention to minutiae that you just don’t find outside the OCD ward of your local sanitarium.

Even immersed in a hobby and lifestyle that treasures, and often rewards fanatical behavior, Stax’s dedication to the story of singer/songwriter Craig Smith is unusual. The result of fifteen years of wool-gathering and pulling at strings, Stax’s Swim Through the Darkness – subtitled “My Search For Craig Smith and the Mystery of Maitreya Kali” – assembles as close to a complete story of the enigmatic Mr. Smith as one could muster at this late date. A talented songwriter and charismatic performer in the mid-to-late ‘60s, Craig Smith seemingly had it all, only to watch everything he wanted slip through his grasp.

Mike Stax’s Swim Through the Darkness


The odds are good that you’ve never heard of Craig Smith, or else he remains a vague memory at best. A clean-cut “All American” lad, Smith was a member of the Good Time Singers that backed singer Andy Williams and performed on his popular NBC television series. The folkish Good Time Singers also toured on their own and recorded a pair of albums for Capitol Records, with Smith often provided the spotlight. After that experience had run its course, Smith hooked up with fellow singer/songwriter Chris Ducey and performed as a folk-rock duo, eventually taking on other members and evolving into a full-fledged band as Penny Arkade.

Under the patronage of Michael Nesmith of the Monkees, who underwrote the band’s rehearsals and recording session as their producer, Penny Arkade recorded a slew of material that would nevertheless remain legitimately unreleased until Sundazed Records compiled almost two dozen songs for a 2004 CD titled Not The Freeze. Although his band faltered, Smith had songs recorded by Andy Williams, Glenn Campbell, and the Monkees, and he used his songwriting royalties to travel the world and figure out the next move in his seemingly upward career trajectory. Sadly, Smith suffered a near-deadly assault in Afghanistan (possibly while on LSD), and the combination of physical trauma and drug use seems to have kick-started an underlying mental illness, derailing Smith’s career permanently.


Before he lost himself completely to his illness and homelessness, Smith experienced a messiah trip and re-named himself ‘Maitreya Kali,’ believing he was Earth’s savior. Friends distanced themselves from Smith’s odd and often disturbing behavior. As Maitreya, Smith recorded and released two self-produced early ‘70s albums that combined unreleased Penny Arkade performances with newly-written songs. Pressed in small quantities, Smith sold copies of both Apache and Inca (the latter of which was combined with the former as a two-album set) to record stores in his native Los Angeles; both albums would later become red-hot collectors’ items for fans of acid folk and psychedelic pop, their rarity resulting in stratospheric five-figure prices whenever a copy surfaced. Without intervention by mental health professionals, Smith ended up on the street after spending a short time in prison, and was homeless for almost 40 years until his death in 2012.

Stax does a yeoman’s job in piecing together Smith’s story, tracking down and interviewing dozens of former friends and music industry colleagues to tax their memories in search of the truth about this talented, albeit obscure singer/songwriter. Stax’s obsession with the protagonist of his story provides insight, but also empathy, the fate of Craig Smith not so much a cautionary tale but rather the saga of promise unfulfilled. As a writer and musician himself, there’s also a bit of ‘but for the grace of God’ underlying Stax’s prose, the author obviously getting personally involved in providing Smith with a well-deserved epitaph to a career gone awry.


Mike Stax’s Swim Through the Darkness provides a fitting coda to Smith’s too-short career, offering a sort of cosmic closure for the late artist (and possible for the author, as well). Although Stax’s work, as published in Ugly Things, has always been well-researched and entertainingly-written, he’s outdone himself here. Swim Through the Darkness is as much an example of brilliant investigative journalism as it is rock ‘n’ roll biography, and Stax’s obsessive efforts have provided Craig Smith something a lot of musicians are denied – a legacy. Grade: A (Process Media/Feral House, released September 20, 2016)

Buy the book from Amazon.com: Mike Stax's Swim Through the Darkness