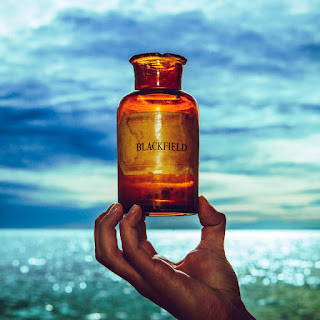 Art-rockers Blackfield – a collaboration between prolific British prog-rock legend Steven Wilson (Porcupine Tree) and Israeli songwriter/musician Aviv Geffen – have released a “lyric” video for their latest song, “From 44 to 48,” from their upcoming album Blackfield V, which will be released on March 17th, 2017 by Kscope Records.

In a press release for the new album, Wilson comments “even though I don’t really write songs with specific projects in mind, as soon as I wrote this one I knew it was for Blackfield.” Continuing, Wilson says, “‘From 44 to 48’ is a song about growing older and letting go of dreams.” The song’s insightful, timeless lyrics and ethereal soundtrack is made all the more otherworldly by Geffen’s winsome string arrangement as performed by the London Session Orchestra. It’s a subtle, but powerful performance captured perfectly by the video.

Blackfield V was written and recorded over eighteen months in both Israel and England, the album featuring thirteen conceptually-linked songs that form a single 45-minute ocean-themed song cycle. Wilson and Geffen provide the album’s vocals, guitars, and keyboards, the duo backed in the studio by drummer Tomer Z and keyboardist Eran Mitelman. Legendary musician, producer, and engineer Alan Parsons worked on three of the album’s tracks. Blackfield V will be released in a number of formats, including a two-disc CD/Blu-Ray deluxe set that offers the album in both high-rez stereo and 5.1 surround sound mix and includes a 36-page color booklet.

Blackfield V will also be available as a single CD and as a two-disc 180g heavyweight vinyl set cut at 45rpm for better sound and packaged in gatefold sleeve with a four page booklet and free mp3 download. A limited edition single 140g vinyl picture disc featuring Lasse Hoile artwork (and including a mp3 download) will also be released on March 17th; a digital download of the album is already available.