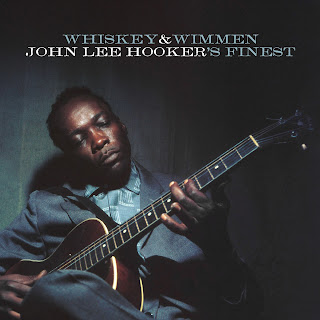 Blues legend John Lee Hooker was prolific to a fault, recording hundreds of albums during the 1940s and ‘50s under cover of various pseudonyms like John Lee Booker, Johnny Lee, Texas Slim, and others – all the better to take the money and run. Hooker also had years of stability during his career, however, recording a number of acclaimed singles and albums for the Chicago-based Vee-Jay Records label circa 1955-1964, interspersed with LPs created for labels like Specialty and Riverside Records during the late 1950s and into the ‘60s, finishing the decade with a 1969 release by Stax Records of material he put to tape back in 1961.

On March 31st, 2017 Vee-Jay Records, an imprint of Concord Bicycle Music, will release Whiskey & Wimmen: John Lee Hooker’s Finest, a sixteen-track compilation that spans several record labels and includes many of the blues giant’s most iconic songs. Widely known as the “King of Boogie” for the undeniable rhythm of his performances, Hooker’s career took off with the 1948 single “Boogie Chillun,” which sold better than a million copies and led to subsequent R&B chart hits like “Boom Boom” (#14), “I Love You Honey” (#29), and “I’m In The Mood” (#1), all of which influenced generations of blues and rock artists, from Canned Heat and the Rolling Stones to George Thorogood, Carlos Santana, and Tommy Castro. Before his death in 2001, Hooker had been inducted into the Blues Hall of Fame (1980) and the Rock & Roll Hall of Fame (1991) and received a Grammy™ Lifetime Achievement Award.

Whiskey & Wimmen: John Lee Hooker’s Finest includes the above-mentioned singles as well as great tunes like “Crawlin’ Kingsnake,” “Dimples,” and “It Serves Me Right To Suffer;” we’ve included the entire track list below. To be honest, much of this material is available on other compilations – there are literally dozens of ‘em, many long out of print – but collected here on one disc, it makes a perfect introduction to the charms of the ‘Hook.’

Once you’ve had a taste of Hooker’s classic early work, you can make your way to such 1970s-era delicacies as Hooker ‘n Heat (recorded in 1971 with acolytes Canned Heat) or 1972’s Never Get Out of These Blues Alive (recorded with Elvin Bishop, Steve Miller, Charlie Musselwhite, and others) before moving onto late-career triumphs like 1989’s Grammy™-winning The Healer (which includes collaborations with folks like Bonnie Raitt and Carlos Santana) and 1991’s Mr. Lucky (produced by Ry Cooder and including artists like Van Morrison, Johnny Winter, and Booker T. Jones). But Hooker’s legacy began with the material featured on Whiskey & Wimmen.