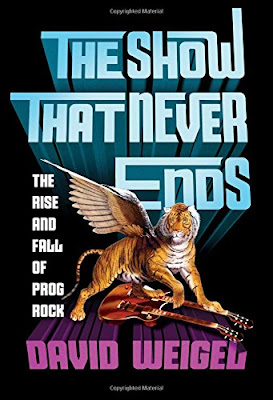 David Weigel is best known as a sometimes-controversial political columnist for the Washington Post, but he has also contributed to online publications like Slate and Politico as well as to print rags like Rolling Stone, GQ, and Esquire and is a frequent commentator on MSNBC. A gifted and often insightful writer, politics is the libertarian-leaning Weigel’s preferred milieu, but every now and then he sticks his toe in the waters of rock ‘n’ roll. Back in 2012, Weigel penned a five-part series of essays about progressive rock for Slate titled “Prog Spring” which provided readers with a sort of primer on the history prog-rock.


Weigel has turned “Prog Spring” into a 360+ page hardback book, The Show That Never Ends. Ostensibly written as a defense of progressive rock by a mega-fan of the genre, the book provides an expanded history of the music through artist interviews, historical material, and Weigel’s thoughts, which are informed by his deep interest in and knowledge of prog-rock. Although I could make a crack about a political columnist taking a writing job away from some hard-working music journalist, I’ll let it pass – although folks like yours truly, the ever-prolific Tommy Hash, or even heavy metal historian Martin Popoff, who has dabbled in prog-rock from time to time – have been writing about the misunderstood prog genre for decades with little of the acclaim (and hype) afforded Weigel’s first book on the subject.

Still, Weigel delves into the subject with the zeal and enthusiasm of a true fanboy. Utilizing his considerable journalistic skills, Weigel has assembled a definitive early history of prog-rock that focuses heavily on the original innovators of the scene like Yes, King Crimson, Genesis, and Emerson, Lake & Palmer while still taking time to dally with fellow travelers like Pink Floyd, Gentle Giant, Marillion, Rush, and Jethro Tull as well as kinda, sorta ‘80s-era prog-popsters Asia. Although Weigel barely acknowledges the era’s cult bands like Camel and Badger, or even the mid-period prog-leanings of British folk-rockers Strawbs, he digs so deeply into the work and history of his preferred artists that one tends to overlook the oversight – there’s a heck of a lot of information provided in these pages. Weigel’s ruminations on experimental, prog-adjacent bands like Soft Machine provide further insight into the genre’s founding and evolution.


Overall, David Weigel does a yeoman’s job in capturing the heart and soul of first generation progressive rock. However, he seems overly smitten with the genre’s original early ‘70s incarnation and pays scant attention to the subsequent evolution of the genre and the Internet-fueled fandom that has supported prog-rock well into the new millennium. Although Weigel offers the briefest, but well-deserved overview of innovative modern prog pioneers like Porcupine Tree, Opeth, and Dream Theater, he completely ignores contemporary prog trailblazers like the Flower Kings and I.Q. or he offhandedly shrugs off the contributions of influential scene-makers like Pallas, Spock’s Beard or Neal Morse’s Transatlantic, all bands with immense international appeal.

So too does Weigel pass over recent recordings by still-relevant artists like Steve Hackett that display fresh new musical ideas that have captured the imagination of young fans for whom first-gen prog represents their ‘grandfather’s music’. The popularity and endurance of online zines like Sea of Tranquility or Ytsejam are also unmentioned except as sources, and the successful present-day run of England’s Prog magazine is mentioned only in passing. Truth is, the genre needs little defense these days – a second generation of rock critics such as myself who grew up on prog-rock have been much kinder to bands like ELP or Tull than our forebears – while a younger crop of rabid prog fans, fueled by YouTube videos, CD reissues, music festivals and webzines, have turned the genre into a veritable cottage industry.

These significant cavils aside, I have to say that I enjoyed The Show That Never Ends as a detailed history of the genre, even if Weigel seems to end his defense of progressive rock a few years (and a few bands) too soon. Grade: B+ (W.W. Norton & Company, published June 13, 2017)

Buy the book from Amazon.com: David Weigel’s The Show That Never Ends