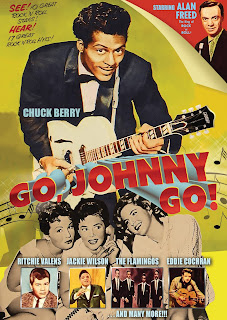 Rock ‘n’ roll was still in its infancy as an art form in the late ‘50s, which led to the creation of a number of films (the predominant form of pop culture at the time) targeting the red-hot teenage market. Although today we look back in embarrassment at a lot of these movies, they helped create a youthful rock ‘n’ roll demographic that would carry the music better than five decades until the present day.

Directed by Paul Landres – who made movies like Destiny and Johnny Rocco and directed episodes of Maverick, Flipper, and other TV shows – Go Johnny Go! was released in 1959 and starred celebrity DJ Alan Freed, rocker Chuck Berry, and singers Johnny Clanton and Sandy Stewart as the romantic couple at the heart of the film. Clanton was a respected talent, part of the New Orleans music scene, working with legends like Dr. John (nee Mac Rebennack) and Allen Toussaint. Clanton’s best-known hit was 1958’s “Just A Dream,” the singer placing seven singles in the Top 40 during the 1950s and early ‘60s.

On October 17th, 2017 VCI Entertainment – the oldest surviving home video company in the USA – will reissue Go Johnny Go! on DVD, to be distributed by our friends at MVD Entertainment Group. Previously released under titles like Johnny Melody, The Swinging Story, and The Swinging Story of Johnny Melody, the film has become a cult favorite for its engaging story and rockin’ soundtrack. The film offers the only cinematic appearance of singer Ritchie Valens before his untimely death, and features Eddie Cochran’s third and final appearance on film.

Featuring a based-in-reality story of DJ Freed searching for the next rock star, the soundtrack to the 75-minute film features performances by Clanton, co-star Chuck Berry, and such luminaries as Ritchie Valens, Eddie Cochran, Jackie Wilson, Harvey Fuqua, the Cadillacs, the Flamingos, and others. Go Johnny Go! is an interesting and entertaining artifact of the early rock ‘n’ roll era.