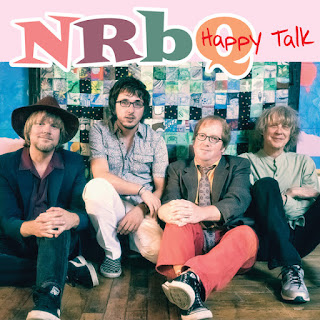 The New Rhythm & Blues Quartet – better known to fans and friends alike as ‘NRBQ’ – enjoyed a banner year in 2016. Celebrating an amazing five decades of great music, Omnivore Recordings released the critically-acclaimed High Noon: A 50-Year History of NRBQ, a five-disc career-spanning box set that collected 106 of the band’s best and best-loved songs that helped introduce the ‘Q to a brand new audience.

The band has lost a few souls along the road over the past fifty years, most recently former member Bobby Lloyd Hicks, who passed away earlier this year. NRBQ keeps choogling along, tho’, the current line-up of founder Terry Adams, guitarist Scott Ligon, bassist Casey McDonough, and drummer John Perrin touring continuously and bringing the band’s unique blend of rock, pop, jazz, and blues to the audiences worldwide.

Never a band to rest on its considerable laurels, on October 20th, 2017 Omnivore Recordings will release Happy Talk, a new five-song EP by the fab foursome. Recorded at Harmonium Studio in Haydenville, Massachusetts Happy Talk features two new original songs along with three covers, including a spontaneous take on Roy Orbison’s classic “Only the Lonely” and the title track, taken from the 1949 Rogers & Hammerstein musical South Pacific.

Says Terry Adams in a press release for the EP, “I’ve been crazy about the song ‘Happy Talk’ since I was a kid; I bought every version I could find and still do. I’ve always wanted to record it. To get it right, you must realize that it’s in its own place that's entirely separate from any song ever written.” Our friends over at Blurt magazine posted a preview of the EP with the Adams’ song “Head On A Post.” Check it out, then get over to Amazon.com and order a copy of NRBQ’s Happy Talk!
Posted by Rev. Keith A. Gordon at Friday, September 01, 2017