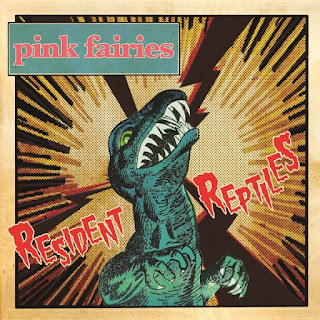 The band was back to three members after Twink left for the following year’s What A Bunch of Sweeties, which also included contributions from the Move’s guitarist Trevor Burton. After a few roster changes, Sanderson and Hunter hooked up with former Shagrat guitarist Larry Wallis for 1973’s Kings of Oblivion. The Fairies packed it in mid-decade when Wallis jumped to join Lemmy in Motörhead.

Interest in the Pink Fairies’ unique brand of anarchic rock ‘n’ roll has been on the rise since the early 2000s when Polydor reissued the band’s first three albums on CD, and various line-ups of the Fairies have performed reunion shows in the ensuing years. On August 24th, 2018 Purple Pyramid (a Cleopatra Records imprint) will release a brand spankin’ new Pink Fairies album titled Resident Reptiles. Featuring original Fairies singer and guitarist Paul Rudolph along with fellow travelers Alan Davey (ex-Hawkwind) on bass and Lucas Fox (Motörhead) on drums, the trio recorded a sizzling eight-song set that will be released on both CD and, of course, pink vinyl.

“I’d say this journey started with Nik Turner introducing me to Cleopatra Records,” says Rudolph in a press release for the new album. “I was asked about the possibility of recording a LP under the Pink Fairies banner and thought – this would be a lot of fun. Get a few people together, turn the amps up to 10 and let ‘er rip. So here it is – a spontaneous collaboration of ideas recorded mostly live. Thank you for listening. Peace and Love.”