Archive Review: Rocket From the Tombs' The Day The Earth Met The Rocket From The Tombs (2002) 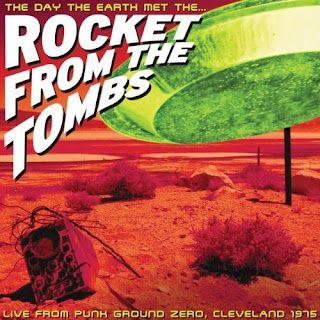 One of rock music’s most interesting cult obscurities, Rocket From the Tombs has become the standard-bearer for an oft-overlooked Cleveland rock ‘n’ roll scene as well as a textbook illustration of “what might have been.” Formed in 1973 by “Crocus Behemoth,” the alter ego of singer David Thomas, the band derived its name from a short film made by Thomas and his friends titled The Day The Earth Met Rocket From The Tombs.

It wasn’t until guitarist/vocalist/songwriter Peter Laughner was added to the ever-fluid Rocket line-up, however, that the band began to focus on making serious music. The best-known Rocket roster, circa 1975, included Thomas and Laughner along with guitarist Gene O’Connor, bassist Craig Bell, and drummer Johnny Madansky. Over the course of the eight months they would play together, these five Cleveland musicians would create a legacy that is still being debated today...only at the time they didn’t know that what they were doing would last beyond tomorrow.


RFTT would develop a unique musical style that was heavily influenced by the underground sounds favored by Laughner and Thomas, artists like the Velvet Underground, Iggy & the Stooges, and the MC5 mixed with a healthy dose of 1960s-styled garage-rock and British Invasion bands like the Who and the Kinks. The resulting songs were chaotic, unpredictable affairs that would often veer off recklessly into sheer sonic overkill, Thomas' yelping vocals and manic onstage performance style driving the audience berserk. With the help of friends at local radio station WMMS-FM and friendly local club owners, Rocket From the Tombs would become one of a handful of popular original bands in a Cleveland rock scene dominated by Top 40 cover bands. When Laughner, then writing album reviews for Detroit’s Creem magazine, gave critic Lester Bangs a tape of a live RFTT radio broadcast, the legendary critic championed it in the pages of the magazine.

Alas, RFTT seemed doomed from the beginning. The band burned so brightly and with such intensity that the members were constantly at each other’s throats. Drummer Madansky left the band at the urging of his girlfriend. When a young Iggy acolyte by the name of Stiv Bators joined RFTT as the primary vocalist, his presence would prove to be so disruptive as to break the band apart. Bators would take guitarist O’Connor (who would become known as Cheetah Chrome) and Madansky (a/k/a Johnny Blitz) and form the Dead Boys while Laughner and Thomas would start a new band called Pere Ubu.


Unfortunately, Rocket From the Tombs never recorded a proper album. Bootleg tapes have circulated for a quarter-century, but now indie label Smog Veil Records has collected the best available tapes from RFTT’s all-too-brief career, cleaned them up as much as possible and has thrown them together as The Day The Earth Met the Rocket From the Tombs. This important compilation is the most complete document available on this legendary band, and the material it preserves is a priceless rock ‘n’ roll treasure. The album includes nine songs recorded in February 1975 in the band’s rehearsal loft, taken from a tape made for broadcast on a WMMS-FM radio program showcasing Cleveland bands. These were probably the songs on the tape given Lester Bangs, including a discordant pre-punk “Life Stinks” and the complex Laughner composition “Ain’t It Fun.”

Three of the songs here are culled from five recorded live by WMMS during a “heavy metal showcase” at Cleveland’s Agora club, while another seven songs were captured on tape during a July 1975 gig opening for Television. Although several of the songs offered on The Day the Earth Met... – notably “Sonic Reducer,” “Final Solution” and “30 Seconds Over Tokyo” – would become legendary when revisited by the Dead Boys and Pere Ubu, neither of those band's renditions comes close to matching the energy and passion of these originals. Choice covers of the Stooges’ “Raw Power” and the Velvet Underground’s “Foggy Notion” reveal RFTT’s roots and influences while several of Laughner’s songs, such as “Amphetamine” and “Transfusion,” show the talents of a gifted wordsmith, a punk Dylan who matched highbrow lyrical poetry with lowbrow street music.


The sound quality on The Day The Earth Met the Rocket From the Tombs is spotty, but certainly no worse than many musically inferior bootlegs. Given that most of these tracks were recorded on reel-to-reel tape in the mid-1970s, it’s a wonder that any survived. As it is, the album shows Rocket From the Tombs to be the creative contemporaries of bands like the Dictators, Television, and the Ramones, an important and influential pre-punk band that would launch both art-punks Pere Ubu and punk legends the Dead Boys.

Sadly, RFTT also serves as a large part of the legacy of Peter Laughner, a brilliant and talented songwriter and guitarist who would die before his place in the rock ‘n’ roll firmament could be ensured. Perhaps the most entertaining historical recording you’ll run across this year, The Day The Earth Met the Rocket From the Tombs deserves shelf space in the collection of any true punk rock aficionado. (Smog Veil Records, 2002)