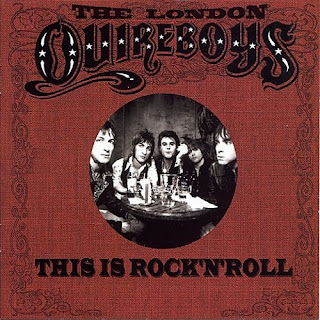 Proving the old adage that “you can’t keep a good band down,” the London Quireboys have come roaring into the twenty-first century with a new line-up, a new album, and a trademark sound that is pure, timeless rock ‘n’ roll. Formed in 1984, the Quireboys were less ‘glam’ than Hanoi Rocks, less obnoxious than Motley Crue, and more roots-oriented than Guns ‘N’ Roses.

The Quireboys’ sound was firmly influenced by classic rockers like the Rolling Stones and the Faces yet, due to the time and place, they were always thrown in amongst the L.A. glamboys and MTV hair bands. The band enjoyed a modicum of success in the U.K. with a handful of albums and hit singles before finally breaking up in 1993.

The London Quireboys’ This Is Rock N’ Roll


The flame refused to die, though, and the Quireboys kept plugging away at it throughout the 1990s. Various roster changes did little to change the band’s raw hard rock sound, the one common thread in the various band line-ups being vocalist Spike Gray. The Quireboys recorded their fourth album proper, Lost In Space, in 2000 and with their latest effort, This Is Rock ‘N’ Roll, they have delivered a rocking coup d’grace. For Spike and the Quireboys it’s always 1973 and This Is Rock ‘N’ Roll echoes the arena rock of Aerosmith, the Stones, and the Faces. Spike’s raucous vocals evoke memories of a young Rod Stewart, his inflection part whiskey and part cigarettes, while the twin guitars of long-time member Guy Griffin and newcomer Luke Bossendorfer wail and roar like ghostly doppelgangers of Keith Richards and Mick Taylor.

The album’s title track is an affirmation of rock ‘n’ roll and band brotherhood that hides a dirty little secret – that for some people, rock music is the only way to go, their only means of escape and, as Rod once sung, a “reason to believe.” It’s more than a livelihood, it’s a reason for being and for veterans like the Quireboys, it’s been a collective identity for so long that they can’t stop now. Shuffle just a few songs down, though, and you’ll find “C’mon,” a rowdy admittance that rock ‘n’ roll may well have passed the band by. Spike sings “don’t go changing my favorite songs, keep them rolling along” with the sad realization that rock music has changed and that, just as for the mods and rockers of the 1960s and the punks of the ‘80s, rock ‘n’ roll has turned its back on the Quireboys as well. These two songs are the cornerstones of This Is Rock ‘N’ Roll, providing a revealing glimpse behind the party-time façade the band has projected for two decades now.


The rest of This Is Rock ‘N’ Roll rattles and shakes like a ’73 Plymouth Satellite, tracks like “Seven Days,” “Turn Away,” and “Show Me What You Got” redlining the speedo, moving from 0 to 100 mph in a single drumbeat. At the proper volume, these songs will peel the veneer siding from your speakers, but for an all-too-brief hour, you’ll experience sheer sonic bliss. Rock music may have changed through the years, but its heartbeat remains the same and the London Quireboys prove with This Is Rock ‘N’ Roll that they have their finger on the pulse. (Sanctuary Records, released February 19, 2002)

Buy the CD from Amazon.com: The London Quireboys’ This Is Rock N’ Roll