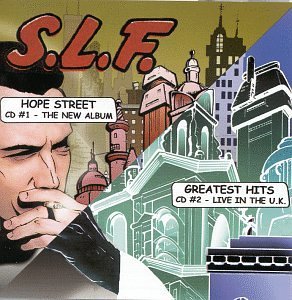 One of the brightest and boldest of the “Class of ’76,” Stiff Little Fingers were Ireland’s working class heroes, brash punks with snarling attitudes and a ‘take-no-prisoner” style of three-chord punk that was heavy on the lyrical polemics and short on subtlety. Through the close to a quarter-century that has passed since the original onslaught of punk, Stiff Little Fingers has persevered through various break-ups, reformations, changes in membership and changes in punk itself.

Through the past few years, with the addition of former Jam member Bruce Foxton on bass, SLF has reinvented itself as more of a traditional rock band. While having roots in the rawest style of punk, SLF has managed to incorporate elements of roots rock, soul, and pop in the creation of an entirely new identity.

Although I’ve been generally impressed with the new direction SLF frontman Jake Burns has taken the band over the course of the last few albums, its seems as if SLF’s evolution has culminated in Hope Street, the new half of an unusual 2-CD set. Along with Hope Street, a collection of a dozen new tunes, a second disc offers the band’s Greatest Hits Live In The U.K. A selection of founding SLF member Jake Burns’ favorite songs, with comments on many from Burns in the liner notes, these ten tracks showcase the fire and passion that SLF originally brought to the material some twenty-years ago. Some of SLF’s best songs are recreated here by a band that is musically superior to the kids that performed these cuts long ago, with scorchers like “Suspect Device,” “Alternative Ulster,” and “Roots, Radics, Rockers & Reggae” representing some of the brightest-burning punk rock that any band has ever created.

As for Hope Street, this new collection of SLF tunes stands quite well on its own. Featuring full-bodied, complex and multi-textured music with lyrics that evince a greater grasp of social commentary, the new SLF has evolved into a damn fine band. Burns’ voice has smoothed out a bit through the years, approximating a rough growl as opposed to the angry snarl of his youth. It is matched on many of the songs by Foxton’s melodic vocals. Guitarist Ian McCallum adds another dimension to the songs with crystal clear lines and energetic riffs that underline the lyrics. Many of the songs on Hope Street, like the anthemic “No Faith,” “Bulletproof” or the lively title track are radio-friendly rockers with a dangerous edge and a contemporary sound.


Although the SLF guys tend to wear their myriad of influences on their collective sleeves at some places on Hope Street – I hear strains of Graham Parker, Midnight Oil, and Inxs in these grooves, to name but a few – they nonetheless work hard to imprint every familiar riff and inflection with their own identity. They’ve succeeded quite well, Hope Street representing a solid effort from a band that has defied the odds to crank out great music long after they were written off by all but their staunchest fans. If you want a great taste of both the past and present of one of the most underrated bands of the punk era, check out this great combo package from Stiff Little Fingers. (Oxygen Records)