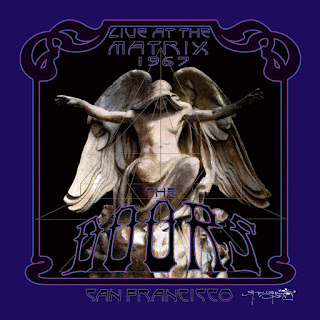 When the Doors were booked to perform two nights at the Matrix in San Francisco in March 1967, they were just another group of hopeful L.A. area musicians trying to ride the rock ‘n’ roll gravy train to fame and fortune. Hungry, loud, raw, and energetic, the band’s first album had only been released a couple of months previous, and few in the sparse audience knew (or, evidently, cared) about the Doors.


I won’t go into too much detail about the band – the story of Jim Morrison, Ray Manzarek, Robby Krieger, and John Densmore is known too well, been re-hashed far too often since Morrison’s “alleged” death in 1971 to bore the reader with useless observations. Suffice it to say that when the band’s self-titled debut was released in early 1967, its unique mix of rock, pop, and blues…shaded with psychedelic strains and Eastern exoticism…sounded like little that had been previously released in the world of rock.

The band’s songs would become weaker with each subsequent album, Morrison’s poetic lyrics strained by hurried composition. The band’s sound would also become overly stylized, polished by the studio and producers to better fit the charts. The performances displayed by the band here are nothing short of remarkable, however. Live At the Matrix 1967 is the first legitimate release of an often-bootlegged set of tapes, drawing material from across the four sets performed by the band over the two nights. Unlike the band’s later recordings, Live At the Matrix 1967 showcases the band in all of its ragged glory.

The two-CD set kicks off with a strident, high-octane take of “Break On Through (To the Other Side).” Starting off with a shuffling beat, the song jumps into Morrison’s rattletrap vocals sitting firmly astride Ray Manzarek’s stabbing keyboard riffs, his voice simply crackling with electricity. Robby Krieger’s guitar is somewhat subdued here, lost in the chaos until he roars above the mix at around the three-minute mark to lay out a razor-sharp solo. The performance itself is breathtaking in its energy, shocking in its relative brevity.

When The Music’s Over

“Alabama Song (Whiskey Bar)” is a fine cross between Delta blues and German cabaret, an odd little song that builds upon the sanitized album version with an even more reckless reading of the lyrics and an intriguing, syncopated rhythm that hits the ears with an outlandish perversity. “Light My Fire,” which would become the band’s breakthrough hit a few short weeks after this performance, stands up well in a live setting, the Doors’ again jamming their way past the eight-minute mark with all the intensity of a wildfire.

The band’s live performance of “Moonlight Drive” is, perhaps, less mesmerizing than the LP version, but manages to create a different sort of magical vibe nonetheless. With reckless vocals, slinky/squealing guitarwork, crashing rhythms, and Manzarek’s keys pounding away at the bottom end, the song sounds almost improvised, chaotic in conception but drunkenly anarchic in its execution. The excellent “People Are Strange” is somewhat more sparsely arranged than the version offered by the Doors’ sophomore album, with Manzarek’s keys chiming freely above subtle rhythms and Morrison’s haunting vocals.

The psychedelically-morose “When the Music’s Over” is extended by a couple of minutes from its appearance on Strange Days, but the longer run time does little to dilute the song’s stammering power. With Manzarek’s ever-present keyboard runs, Morrison’s voice soars and dips, stomps and plunders across the lyrics like a pirate’s swordfight, his swaggering voice matched by Krieger’s distorted, strangely disquieting fretwork, which runs through the song like a needle and thread. The result is a thoroughly off-balance work of genius that strained against the boundaries of rock music that themselves were being almost weekly with new album releases
from a number of artists.

In the beginning, the Doors brought a strong blues-rock flavor to their material, and this is displayed up-front on Live At the Matrix 1967 with a number of blues and R&B covers, some working and some… like the middling “I’m A King Bee”…falling flat on their face. A cover of Bo Diddley’s classic “Who Do You Love” is stronger – propelled by Densmore’s tribal drumbeats and an overall anarchic instrumental vibe, Morrison’s fledgling lizard king vox pairs nicely with Diddley’s voodoo-infused lyrics. The band’s take on John Lee Hooker’s classic “Crawling King Snake” is appropriately menacing, even if Morrison’s primal howl is no match for the master’s mojo hand. A spirited and inspired cover of the Van Morrison/Them garage-rock classic “Gloria” is provided one of the best performances short of Patti Smith’s classic take of the song. Starting slow and simmering to a boil, the Doors’ performance is built on a lively guitar lick and galloping drumbeats, augmented by Manzarek’s best approximation of a Farfisa organ run amok.

The sound on Live At the Matrix 1967 is somewhat hollow, sometimes muddy, and often times bright to the point of distraction, i.e. it stands a notch above that of a decent bootleg CD, but less palatable to sensitive ears than your watered-down, slick-as-a-baby’s-bottom contemporary live LP. No matter, ‘cause it’s the songs here that matter, and to that end Morrison et al deliver, perhaps, their best performance ever caught on tape. Along with the historical provenance of these recordings, should be enough to spur long-suffering Doors fans to their local music emporium to snatch up a copy of Live At the Matrix. (Rhino Records, released September 27, 2008)

Buy the CD from Amazon.com: The Doors’ Live At the Matrix 1967

----------
Editor’s Note: evidently there is a growing controversy over the tapes used by Rhino/Warner Bros. to master Live At the Matrix ‘67. You can read all about the subject on Wikipedia: http://en.wikipedia.org/wiki/Live_at_the_Matrix_1967