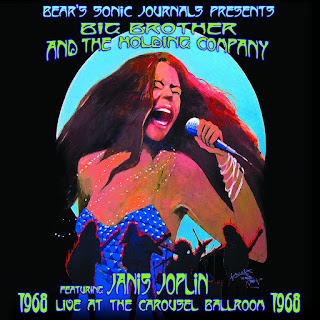 For the late, great Janis Joplin, it all began back in 1966 with psychedelic blues-rockers Big Brother & the Holding Company. Chet Helms, the band’s manager and an old friend from Texas, convinced Joplin to join Big Brother, a band that didn’t seem to really want the singer. Joplin and Big Brother got over their shotgun marriage, however, and the singer vaulted to stardom – or at least notoriety – on the strength of the band’s sophomore album Cheap Thrills. Joplin would leave the band after less than three years to strike out on her own, leaving behind two studio albums and the Live at Winterland ‘68 set as the only documents of her tenure with Big Brother.

Live at the Carousel Ballroom 1968 represents a previously unreleased performance by Big Brother & the Holding Company featuring Joplin, taken from the archives of legendary San Francisco scene soundman Owsley “Bear” Stanley. Stanley made his bones mixing live sound for the Grateful Dead in 1966, and he ran the sound system at the Carousel Ballroom, which would later become the legendary Fillmore West. Stanley often recorded the shows he worked as a way to improve the listening experience, recordings he called his “sonic journals.” Live at the Carousel Ballroom 1968 is the first of “Bear’s Sonic Journals” to be released commercially, and was mixed by Stanley, who also oversaw the album’s mastering before his death.

Recorded a couple of months after the show documented by Live at Winterland ‘68, the tracklist for Live at the Carousel Ballroom 1968 includes all of the band’s well-known songs at the time – “Down On Me,” “Ball & Chain,” “Piece of My Heart,” “Summertime” – but it also includes some obscure material as well, like a rare live performance of “It’s A Deal” and “Call On Me,” from the band’s self-titled first album. An extended jam, titled “I’m Mad” (or “Mad Man Blues”) can’t be found anywhere in the band’s catalog, and the album also includes a live reading of “Coo Coo,” a 1967 track that was only released on a 45rpm single at the time.

The show opens with “Combination Of the Two,” a lesser-known but no less powerful song from Cheap Thrills, the performance starting slow and building to a feverish crescendo with buzzing guitars and throbbing bass lines, crashing percussion, and scraps of Joplin’s already-powerful voice. While not the best showcase for Janis – she barely sings here – the psychedelic cacophony provides a lasting snapshot of the trademark Big Brother sound. The slow-burning “I Need A Man To Love” features Janis in full-blown mode, singing and moaning, screaming and scatting atop the band’s fluid, bluesy groove. “Flower In the Sun” is one of the band’s underrated gems, featuring a fine Janis vocal performance that relies more on straight, torch-style vocals as well as plenty of James Gurley’s imaginative fretwork.

Piece of My Heart

Another treasure here is the driving psychedelic jam “Light Is Faster Than Sound.” Written by Big Brother bassist Peter Albin, this live performance takes on an improvisational jazz-styled vibe, with swirling guitars and waves of instrumentation spinning like a whirlpool around Joplin’s soulful vocals and the band’s backing harmonies, before descending into a tsunami of guitars and percussion. By contrast, the moody and atmospheric take provided “Summertime” starts out deceptively languid before Joplin’s voice and the nuanced backing guitars build the song up to an emotional peak. “It’s A Deal” is an unabashed garage-rockin’ good time with plenty o’ feedback and distortion riding high in the mix alongside Joplin’s wildfire vocals.

The familiar “Call On Me” is delivered as a straight-forward soul-blues number, mid-tempo with six-string flourishes and a bit of over-amped distortion, but otherwise a remarkable reading of the song. A second version of “Call On Me,” from the previous night, is slower and bluesier and just as moving. “Piece of My Heart” is every bit the over-the-top blues-rock rant offered by the studio version, Joplin’s soaring vocals matched by subtle instrumentation that amps up to match the singer’s swells of emotion. The obscure “Coo Coo” is a welcome find, a mostly-instrumental rocker with heavy bass and sizzling guitar galloping through the mix, with little but random shouts heard from Ms. Joplin, while the raucous “Down On Me” closely mimics the album version, albeit with more scattershot guitarplay behind Joplin’s forceful performance.

Remarkably, the sound on Live at the Carousel Ballroom 1968 is pretty good considering the primitive recording technology used at the time, even if the stereo separation is purposely a bit unusual. Stanley did a great job in capturing the ambiance, the energy, and the spirit of the performance, and of the era...the album sounds like you’re watching the performance live. Noted rock critic Jaan Uhelszki’s liner notes put the recording in context, Stanley Mouse’s cool cover art is period perfect, and a 28-page CD booklet includes plenty of rare photos.

Hopefully we’ll get to hear more from Bear’s private musical stash in the future, but in the meantime, Live at the Carousel Ballroom 1968 – featuring a red-hot performance by Big Brother and the Holding Company and their larger-than-life singer – is a “must have” not only for the Janis faithful, but also for fans of 1960s-era psychedelic blues-rock jams. (Legacy Records, released March 13, 2012)