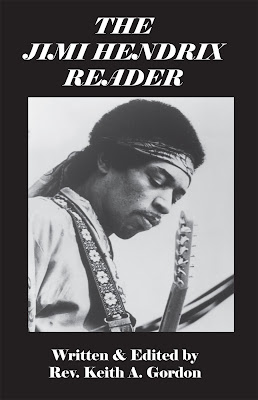 Better than 50 years beyond his tragic death at the too-young age of 27, Jimi Hendrix still manages to turn heads and stir up controversy. Arguably the most innovative and influential guitarist to wear the “guitar god” mantle in rock ‘n’ roll, Hendrix – for reasons outlined in this book – was all of the above, and more. Hendrix created an entirely unique musical voice and language, blending such diverse (and divergent) genres as blues, jazz, R&B, soul, British Invasion rock, psychedelia, and even American folk music into the creation of a newly-exploding supernova of sound.

The Jimi Hendrix Reader attempts to provide the rock ‘n’ roll fan with an introductory tome. Hendrix’s catalog of music may seem daunting – there are a lot of recordings out there to choose from – which is why The Jimi Hendrix Reader was built around an annotated discography to help separate the wheat from the chaff. An incomplete biography outlines the highs (and lows) of the guitarist’s career, whereas reviews of a dozen key Hendrix albums provide greater context and insight into his music and enduring popularity.

Rev. Keith A. Gordon has been writing about rock and blues music for over 50 years. A former contributor to the All Music Guide books and website, and the former Blues Expert for About.com, Rev. Gordon has written or edited 25+ previous music-related books, including Blues Deluxe: The Joe Bonamassa Buying Guide, The Other Side of Nashville, and Scorched Earth: A Jason & the Scorchers Scrapbook.

Buy an autographed copy of The Jimi Hendrix Reader directly from the Reverend for $19.99 with free shipping!

Prefer to buy from Amazon.com? Here's a link to the print version of The Jimi Hendrix Reader (also available as a $3.99 Kindle eBook)
Posted by Rev. Keith A. Gordon at Sunday, October 30, 2022