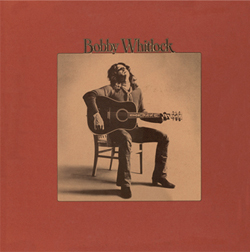 Here's some great news for fans of Eric Clapton, Delaney & Bonnie & Friends, and other soul-inflected Southern rock artists…essential music from legendary singer, songwriter, keyboardist, and guitarist Bobby Whitlock will finally be made available on CD.

On June 25th, 2013 Future Days Recordings – an imprint of the respected Light In The Attic Records label – will release Whitlock's Where There's A Will, There's A Way. The CD features the artist's first two solo albums: Whitlock's self-titled 1972 debut and Raw Velvet, which was released later that year. For those who prefer their tunes on glorious, inky-hued black vinyl, both albums will also be released individually on 180-gram vinyl records with original artwork and liner notes. The CD set also includes extensive liner notes.

Whitlock is one of the unsung heroes of Southern rock 'n' roll. Born in Memphis, Tennessee into abject poverty, his preacher father had him out picking cotton in the fields as a child. Whitlock soaked up the blues, gospel, and R&B sounds he heard on the radio, teaching himself keyboards and guitar. By the time he was a teen, Whitlock was playing sessions for Stax Records and, coming to the attention of Delaney Bramlett, was asked to join Delaney & Bonnie & Friends, where he met and befriended legendary guitarist Eric Clapton.

It was his work with Clapton for which Whitlock is best known, the two musicians forming Derek & the Dominoes with drummer Jim Gordon and bassist Carl Radle. Whitlock wrote or co-wrote six songs on the band's Layla and Other Assorted Love Songs, and sung on his own "Thorn Tree In The Garden." Whitlock also played on George Harrison's All Things Must Pass album.

Whitlock launched his solo career after being signed by ABC-Dunhill Records, and his two albums for the label are minor classics of roots-rock, blues, and Southern soul. Both are packed with guest stars, too, with folks like guitarists George Harrison, Eric Clapton, and Rick Vito; backing vocalists Delaney & Bonnie Bramlett; bassist Klaus Voorman (Manfred Mann and the Plastic Ono Band); and saxophonist Bobby Keys, among others, lending their talents to the two albums. Whether you go for the CD or vinyl reissues, these are two vital and essential albums that have long been out of print…
Posted by Rev. Keith A. Gordon at Wednesday, June 19, 2013