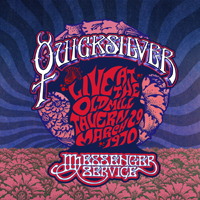 There must be a ready market for these Quicksilver Messenger Service pseudo-bootlegs with dodgy provenance (and often questionable sound), because a bunch of fly-by-night labels have cranked out better than a half-dozen such releases in the last four years or so. Live At The Old Mill Tavern, documenting a March 1970 QMS show from Mill Valley, California was released digitally and as a CD-R in 2012 and now gets the full digipak CD treatment from the good folks at Cleopatra Records, which at least ensures a decent package with the best sound possible.

Of all the live QMS recordings floating around, this one is notable in that it features a newly-reunited band line-up that included singer Dino Valenti along with guitarists Gary Duncan and John Cipollina, bassist David Freiberg, keyboardist Nicky Hopkins, and drummer Greg Elmore working out on tunes like Valenti's "Mojo" and Bo Diddley's "Mona." This particular set includes two lengthy blues jams with Chicago blues legend James Cotton (extending out 21+ minutes) and the sort of blues-infused psychedelic pop that only Quicksilver could deliver.

My old buddy Dave Thompson wrote the liner notes for Live At The Old Mill Tavern, and the label's press releases quotes from them, telling us more about the story behind the album. “The six-piece band – Dino Valenti, Gary Duncan, John Cippolina, David Freiberg, and Greg Elmore – had only been playing together a few months, since New Year at the Fillmore rang in this new decade, and they are blazing tonight, ” writes Thompson. “Fiery and more fiery still...waiting in the wings for encore time was harmonica legend Jimmy Cotton, whose eponymous Blues Band was kicking the crap out of more or less every band it came up against in concert...there's a lot of live Quicksilver material out there, and that is how it should be. The records are great but, as all the members have said, it was live that the Messenger Service really smoked, and the live tapes that truly mark the life and times that they lived so well. This recording punches all of those buttons, and a whole bunch more besides!”
Posted by Rev. Keith A. Gordon at Friday, August 16, 2013