CD Review: Hackamore Brick's One Kiss Leads To Another 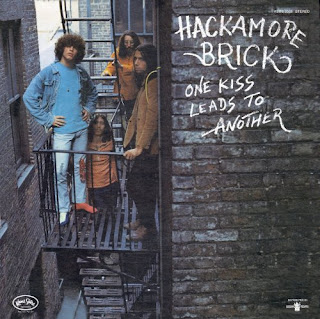 HACKAMORE BRICK
One Kiss Leads To Another
(Real Gone Music)

Brooklyn-born Hackamore Brick were one of the great "should have beens" in 1970s rock 'n' roll, the foursome's decade-opening album One Kiss Leads To Another earning the Brick cult band status, the vinyl LP becoming a high-priced collectors' item that only grew in status as the years passed. The band's curious mix of minimalist pop-rock songcraft and overt Velvet Underground influences – the band members were reportedly all VU fan club members – presaged both late 1970s new wave and '80s-era power-pop sounds.


Comprised of singer/keyboardist Chick Newman, guitarist/singer Tommy Moonlight, bassist Bob Roman, and drummer Robbie Biegel, Hackamore Brick was the proverbial mystery band. Although One Kiss Leads To Another generally earned the band critical kudos, not much else seems to have been written about Hackamore Brick in the music press. When they disbanded a little more than a year after their debut album's release, the band disappeared into the rock 'n' roll memory hole along with fellow obscurities Blue Ash and Crabby Appleton, awaiting re-discovery at a later date. The band's story isn't really remarkable by rock 'n' roll standards. Newman and Moonlight formed the core of the band, with Biegel and Roman coming on board later.

After gigging around the NYC area for the better part of a year, opening for folks like Richie Havens and British jazz-rock band If, and playing solo shows at such dubious locales as the city's Bellevue Psychiatric Hospital, the band came to the attention of Kama Sutra Records. The label was attempting to branch out beyond its bubblegum pop music roots, signing rockers such as the Flamin' Groovies and Dust, so Hackamore Brick fit right into the label's plans. One Kiss Leads To Another was recorded in just one week with former rock critic Richard Robinson producing, the album subsequently released into the world with little or nothing in the way of promotion…not unlike those great Groovies and Dust records, when you think about it.

Hackamore Brick's One Kiss Leads To Another


After decades of discussion and conjecture, One Kiss Leads To Another has finally been reissued on CD and is available for deeper inspection. The album kicks off with Chick Newman's laid-back ballad "Reachin'," the song's mellow vocals and elegant arrangement sounding like an outtake from Lou Reed's self-titled 1972 solo debut, and belying a similar dark lyrical hue resting uneasily beneath the surface. The song's introspective vibe and minimalist instrumentation echoes that which would come later from Jonathan Richman's Modern Lovers and also places it in the 1980s college rock firmament alongside bands like the dB's and Game Theory.

Moonlight's "Oh! Those Sweet Bananas" may sport an oddball title and slightly-skewed lyrics but the song furthers the band's Velvet Underground connection with Newman's flat, Lou Reedish vocal intonation, an infectious melody, and Moonlight's raw, undisciplined, and minimal fretwork. By contrast, the guitarist's "Radio," which was released as the album's single, is an early 1960s-styled gentle rocker with a great chorus and a melodic hook, but a definite mid-1970s vibe with awkward lyrics and Moonlight's breathless vocals.

I Watched You Rhumba


"I Watched You Rhumba" is similar in style to "Radio," albeit more upbeat and not dissimilar from some of REO Speedwagon's later tunes, mixing a pop-rock rhythm with energetic pianoplay and spry guitar licks driving the fast-paced vocals. Newman's mid-tempo "I Won't Be Around" is an interesting construct, the arrangement driven by the singer's vocals and top-of-the-mix piano with an underlying keyboard riff and a few crashing cymbals and cascading drumbeats. "And I Wonder" is even more pastoral, the vocals literally hidden beneath the lush instrumentation and calliope keyboard washes with work at a counterpoint with each other. One keyboard track sounds like Ray Manzarek of the Doors, mysterious and atmospheric, while the other evokes the psych-pop of bands like the Millennium. The song builds to an interesting instrumental crescendo with a definite Middle Eastern vibe that simply sings "psychedelic."

The Newman/Moonlight composition "Zip Gun Woman" is an up-tempo rocker that could have provided an interesting musical direction for the band had it forged a second album. Riding a strident keyboard riff that flowers into a proggish jam, Moonlight's rapidfire vocals dance effortlessly along the edge with dangerous appeal. The Real Gone Music CD reissue of One Kiss Leads To Another includes three bonus tracks, including the previously unreleased single version of "I Watched You Rhumba" in glorious mono. A cover version of the Leiber-Stoller song "Searchin'" was the B-side of the "Radio" single, the song a solid rocker with a Rolling Stones feel, snarling vocals, and punkish intensity.


So, does Hackamore Brick's One Kiss Leads To Another live up to the hype you ask? Well, yes and no…the album is a solid collection of pop-oriented rock songs with intriguing performances. However, Robinson's immature and often slight production leaves several songs sounding unfinished, although the re-mastering for CD certainly provides a welcome sonic "pop" to the material. A stronger guiding hand in the studio may have also helped the young band further develop some of the songs into true power-pop masterpieces.

Moonlight wasn't the strongest guitar player on the late 1960s scene, and his six-string contributions here are largely overshadowed by Newman's stellar and ever-present keyboards. The rhythm section of Roman and Biegel are sturdy but unspectacular, but the songwriting skills of Newman and Moonlight are the album's definite high point, the pair – both solo and together – showing a great deal of promise as composers that, with a little ripening, could have been world-beating. Overall, I'd heartily recommend One Kiss Leads To Another for any fan of 1970s pop-rock, Hackamore Brick an also-ran that could have been great given the time and attention they deserved. [Review by Rev. Keith A. Gordon]

(Click here to order Hackamore Brick's One Kiss Leads To Another from Amazon.com)
Posted by Rev. Keith A. Gordon at Tuesday, September 03, 2013