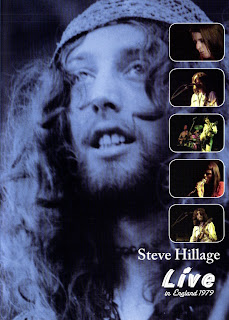 An important member of progressive rock's royal family, guitarist Steve Hillage had his fingers in a number of groundbreaking and influential prog-rock outfits of the late 1960s and early '70s. With keyboardist/guitarist Dave Stewart (no, not the Eurythmics guy), Hillage formed the group Uriel, which evolved into prog cult faves Egg after Hillage's departure for school.


The guitarist popped up a couple years later to form the short-lived prog outfit Khan with Stewart, the band releasing one acclaimed album, 1972's Space Shanty, after which Hillage hooked up with former Soft Machine guitarist Daevid Allen in the influential psychedelic experimental prog band Gong. Hillage contributed fretwork and songwriting to three of Gong's most important albums: 1973's Flying Teapot and Angel Egg, and 1974's You.

After reuniting with Stewart and Egg to record that band's third and final album, 1974's The Civil Surface, Hillage hung out his shingle and begun flying solo with the 1975 release of his excellent debut album, Fish Rising. A number of acclaimed albums would follow, including 1976's L and the following year's Motivation Radio. By the mid-1980s, however, Hillage had turned to production, working on albums by Simple Minds and Robyn Hitchcock before virtually disappearing from music altogether. He would resurface in the 1990s, working with electronic dance band the Orb before launching his own electronic outfit System 7, with which he has explored the far reaches of popular music well into the 2000s.


In 1979, however, Hillage and band were touring in support of that year's Live Herald album, itself a collection of fine performances of material from across the previous half-decade of Hillage's career. Live In England 1979, a two-disc CD/DVD set, takes the Live Herald tracklist one step further…capturing a February 1979 performance by Hillage at The University of Kent, this Gonzo Multimedia release offers up over an hour of mind-bending prog-rock audio but also a video version of the performance.

Live In England 1979 opens with the psychedelic-tinged six-minute rocker "The Salmon Song," taken from Hillage's debut disc, that offers up plenty of screaming guitars courtesy Hillage and his old friend Dave Stewart, and some amazing percussion work by drummer Andy Anderson. "Unzipping the Zype" is a freeform band jam that includes synthesizer wizard (and longtime Hillage partner) Miquette Giraudy and bassist John McKenzie along with Hillage, Stewart, and Anderson, every band member getting an instrumental moment in the spotlight while Hillage and Giraudy share vocals. The song is a spacey amalgam of prog-rock, jazzy licks, electronic riffing, and heady percussion.


Hillage's take on Donovan's "Hurdy Gurdy Man" is taken from the guitarist's album L and twisted into a hallucinogenic musical landscape that the composer wouldn't recognize. With Giraudy's synth swirls providing a multi-hued backdrop, the band's gorgeous vocal harmonies, and Hillage's imaginative guitar licks take the hippie anthem to an entirely higher plane of consciousness. Ditto for the band's take on George Harrison's classic "It's All Too Much" (taken from the Beatles' Yellow Submarine album), the performance graced by dancing synths, melodic vocals, and gorgeous guitar lines.

Two bonus tracks on Live In England 1979 are actually live performances from an uncredited 1977 show, perhaps the Rainbow Theatre show in London that was partially documented by Live Herald. Both "Hurdy Gurdy Glissando" and "Electrick Gypsies" are culled from Hillage's L album, the former ostensibly inspired by the Donovan tune, Hillage and crew taking their vision to deliciously mind-altering extremes, the performance a third eye-opening psychedelic brew of soaring guitars; buzzing, throbbing synthesizers; breakneck percussion; and fluid bass lines that mix jazzy and classical elements into the prog-rock stew. The latter is a more straight-forward 1970s-era hard rock number but with plenty of proggy flourishes like phased fretwork, jazzy percussion, odd time changes, and oscillating synth riffs livening up the performance.


The DVD portion of Live In England 1979 offers up pretty much the entire audio portion of the set, minus the 1977 live bonus tracks but including the ethereal dueling acoustic and electric guitars of "Radio," a simply stunning performance that emerges from billowing clouds of smoke-machine generated fog, as well as the scorching "Light in the Sky," another period rocker with plenty of spacey visuals, Giraudy's oddball vocals, and Hillage's lively fretwork. The DVD also includes a 2006 interview with Hillage and Giraudy talking about the Live Herald album and the tour documented by Live In England 1979.

Overall, Live In England 1979 offers up a fine representation of the Steve Hillage Band on stage as well as the guitarist's creative state of mind during the latter part of the 1970s as Hillage explored the outer reaches of the psych, prog, and hard rock universes. The CD and DVD are a lot of fun, and a welcome reminder of Hillage's immense and often underrated talents and his hallowed status as one of progressive rock's great guitarists and composers.