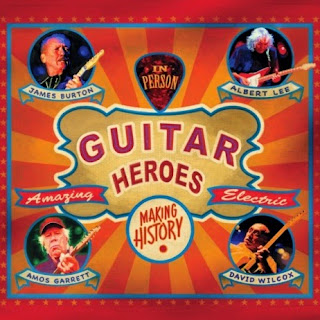 Unless you’re the kind of geek that pores over album cover notes or (*shudder*) reads Rolling Stone magazine for fun, chances are that you’re not familiar with the men responsible for this recording. The musical pedigrees of the four talented guitarists featured on Guitar Heroes are unassailable, however, each making a major individual contribution to the big book of rock ‘n’ roll…some of these guys were riding up and down the backroads long before string-benders like Eric Clapton and Jimmy Page ever hit the stage.

The oldest of our quartet, James Burton, is a Rock & Roll Hall of Fame inductee who played with Ricky Nelson throughout his teen idol years; he later led Elvis Presley’s band from 1969 until his death in 1977. Burton’s list of album credits is long enough to fill a phone book, but among those he’s played and recorded with are Gram Parsons, Roy Orbison, Elvis Costello, Jerry Lee Lewis, and Johnny Cash. British multi-instrumentalist Albert Lee is no slouch himself, making his bones as part of the legendary Chris Farlowe’s Thunderbirds in the early 1960s before forming the underrated British rock outfit Head Hands & Feet, which released a number of fine albums in the early 1970s.


Lee was Burton’s replacement in Emmylou Harris’s Hot Band and, aside from his own acclaimed solo work, he has performed and/or recorded with a virtual “who’s who” of 20th century musical giants, including Eric Clapton, Deep Purple’s Jon Lord, Gene Clark of the Byrds, Roseanne Cash, and Bill Wyman’s Rhythm Kings, among many others. So, we have representatives of the USA and Great Britain, how about Canada? Amos Garrett’s contributions are no less impressive than his peers – he toured behind popular Canadian duo Ian & Sylvia in the late 1960s before joining Paul Butterfield’s Better Days with his friend Geoff Muldaur, recording a pair of albums with the Chicago blues legend.

Garrett later played on Maria Maldaur’s hit 1970s-era albums – that’s his guitar you’ll hear on Maldaur’s “Midnight at the Oasis” – and has enjoyed his own acclaimed solo career as well as playing alongside folks like Jerry Garcia, Elvin Bishop, Stevie Wonder, and Todd Rundgren. Fellow Canadian David Wilcox, at 65 years old, is the kid in this guitar-wielding gang. Although not as well-known as his older colleagues, Wilcox has forged a lengthy and successful solo career in his homeland and, like Garrett, is an alumnus of Ian & Sylvia’s beloved Great Speckled Bird band.

Masters of the Telecaster


Backed by Albert Lee’s regular touring band, including keyboardist and vocalist Jon Greathouse, bassist Will MacGregor, and drummer Jason Harrison Smith, these four “Masters of the Telecaster” came together for a special one-night performance at the Vancouver Island MusicFest in July 2013. Guitar Heroes captures that concert exactly as it happened, with no editing, overdubs, or studio gimmicks – just four old road warriors pickin’ together on an inspired set of blues, rockabilly, and rock ‘n’ roll tunes. If you’re the kind of music-lovin’ fool that likes to hear some fancy guitarplay, then Guitar Heroes is right up your alley…

Guitar Heroes opens with a rockabilly rave-up of Elvis’s cover of Arthur “Big Boy” Crudup’s juke-joint jam “That All Right (Mama),” a song probably performed ad nauseum by Burton back in the ‘70s. With Garrett handling the vocals, each of the guitarists takes a solo turn, Lee’s sweeter tones balanced by Burton’s piercing twang, all four men obviously having a hell of a time with the performance. Dale Hawkins’ classic “Susie Q” puts keyboardist Greathouse on the microphone and, while not possessing the same sort of primal growl as Hawkins, he acquits himself nicely nonetheless. The guitar solos here skew more towards Creedence Clearwater’s swamp-rock vibe, but as Burton created the original recording’s familiar riff back in 1957 while playing with Hawkins, the performance here can’t help but be faithful to the original, can it?


Garrett gets the spotlight all to himself on the gorgeous instrumental “Sleep Walk,” his beautiful guitar tone shimmering like moonlight off a quiet lake as the band steps out of his way and delivers a perfectly subdued musical backdrop for his imaginative fretwork to shine. Wilcox has a turn on “You’re The One,” his fractured solo laid out across loping rhythms before he jumps in with a hearty vocal performance. The soundtrack is a sort of modified Chicago blues shuffle, and Greathouse’s flashes of honky-tonk piano offer a fine counterpoint to Burton’s twangy licks. The instrumental “Comin’ Home Baby” provides a chance for each guitarist to spank the plank, Wilcox’s disjointed style leading smoothly into Burton’s jazzy, almost Santana-styled notes. Lee and Garrett seem to combine to create a mesmerizing ambiance to the song, and the chemistry between all four players is simply incredible.

An inspired cover of Big Joe Turner’s classic “Flip, Flop and Fly” rocks like a runaway locomotive; with Wilcox at the microphone knocking out a rowdy vocal performance, the guitarists juke like there’s no tomorrow. Lee’s lively solo is matched for electricity by Garrett’s jazzier strum, but it’s Burton’s trebly chickin’ pickin’ that manages to properly channel Turner’s original energetic performance. Tony Joe White’s country-blues classic “Polk Salad Annie” finds new life as a rowdy instrumental; with Burton’s swampadelic fretwork leading the charge, Garrett’s livewire licks follow shortly thereafter as the band choogles along with reckless abandon. MacGregor is provided a spry, albeit too brief bass solo, and Greathouse’s keyboard-pounding provides balance to the song’s six-string overdrive. Lee’s own original “Country Boy” closes out Guitar Heroes, the guitarist’s shit kickin’ licks leading the race as the rhythm section strives to catch up on what is, perhaps, the best pure country song ever ignored by Nashville.


What else really needs to be said? James Burton, Albert Lee, Amos Garrett, and David Wilcox have been responsible for, or contributed to some of the best, most timeless music made on two continents over the past 50+ years. They’re all four consummate professionals, infinitely skilled instrumentalists whose addition to any performance – whether on stage or in the studio – automatically improves anything they’re involved with.

They’re no mere six-string technicians, however, hoping to sand down the rough edges of their performance with studio effects. These guys are old-school geniuses with decades of experience and the raw ability able to spin imaginative guitarplay into gold no matter the genre, whether it be roots-rock, country, rockabilly, or blues. If you revel in the sheer joy of expressive, entertaining guitar playing, look no further than Guitar Heroes for your next fix. Grade: A (Stony Plain Records, released May 5, 2015)