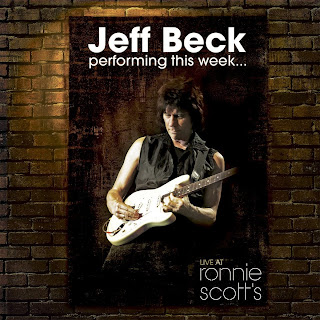 British blues-rock guitarist Jeff Beck first came to prominence as Eric Clapton’s replacement in the legendary British blues-rock band the Yardbirds. Better than five decades have passed since that time, and Beck has shown a maddening propensity for confounding the expectations of any observer. His impressive catalog of music ranges from blues-rock and proto-heavy metal to jazz-fusion, pop, and even reggae.

Performing This Week...Live At Ronnie Scott's documents the highlights of a week’s worth of performances from 2007 by Beck and his hand-picked band of bassist Tal Wilkenfeld, keyboardist Jason Rebello, and drummer Vinnie Colaiuta. The album was originally released in 2008 as a single-disc set featuring sixteen inspired performances; seven years later, Eagle Rock has graced us with an expanded version including a second disc with bonus tracks featuring guest stars like Clapton, and singers Joss Stone and Imogen Heap. The new disc also includes a seven-song live set by Beck with British R&B outfit the Big Town Playboys, with which the guitarist recorded the 1993 album Crazy Legs.


Beck used his five-night stand at Ronnie Scott’s club to revisit a wide range of musical memories. Performing This Week opens with Beck's classic rock chestnut, “Beck’s Bolero,” first recorded in 1966 with members of the Who and the guys that would eventually become Led Zeppelin, and was originally issued as the B-side of an early Jeff Beck single. The song is, structurally, a confused mess of martial rhythms and neo-classical riffs paired with Beck’s soaring, mournful guitar riff that speaks in its own otherworldly voice before the song breaks down into a blues-rock romp amidst a squall of instrumentation. By any theory, it shouldn’t work – but it does – and the song has thrilled audiences for decades now!

From this point, Performing This Week runs fast and loose through a set of songs that showcase Beck’s broad musical palette. The guitarist’s love of avant-garde jazz is on display with the band’s scorching cover of John McLaughlin’s “Eternity's Breath.” Beck’s fingers dance across the edge of a breathtaking song that reveals elements of blues, funk, rock, and jazz sitting in wait beneath a storm of percussion, Beck’s fretwork moving from silence to a scream and back in the blink of an eye. Beck’s reading of jazz drummer Billy Cobham’s classic “Stratus” is both subdued and elegant, the guitarist not attempting to merely mimic the underrated Tommy Bolin’s original 1973 fretwork, but rather build upon it in a re-imaging of the song’s aggressive mix of rock, jazz, and blues.

Beck’s Brush With The Blues


Stevie Wonder’s classic “Cause We’ve Ended As Lovers” is interpreted by Beck as a melancholy dirge, crying notes capturing the bittersweet feel of the original. Performed sans vocals, the arrangement relies heavily on instrumentation to create the atmosphere, and the weeping guitar and subtle, funky bass notes do not disappoint. The energetic “Blast From The East” begins with a wiry rhythmic framework on top of which Beck embroiders his golden six-string flourishes, the guitarist’s recurrent, mesmerizing riff-like lead punctuated by blasts of psychedelic color, explosive percussion, and a funky throbbing bass-line. An inspired mash-up of Charles Mingus’ “Goodbye Pork Pie Hat” with the Beck/Tony Hymas original “Brush With The Blues” falls heavier on the blues side of the musical equation. Beck’s dark-hued arrangement of the songs amplify their mournful aspects, his guitar scattering crying notes across a subdued drumbeat and slight rhythm, Beck coaxing tears out of his instrument, duplicating the saddest blues lyrics you've ever heard.

Beck revisits a number of fan favorites with Performing This Week. The lively “Led Boots” is a flat-out rocker with razor-sharp blues-rock riffs and nimble percussion, while Beck’s “Scatterbrain” begins with a locomotive rockabilly riff before descending into literal madness, the musicians delving deep into instrumental anarchy before order is once again restored to close the song. Beck’s version of the Lennon/McCartney Beatles’ gem “A Day In The Life” has been a live staple of his for years, and here he imbues the song with such lovely grace and dignity that you can literally hear the well-worn lyrics sung through his instrument. The Tony Hymas/Simon Phillips jam “Space Boogie” from Beck’s 1980 album There and Back is a perfect example of the guitarist’s mid-to-late 1970s flirtation with eclectic jazz-fusion. Beck’s dynamic, manic fretboard runs duel with Jason Rebello’s lively piano-pounding, the song sounding altogether like an entertaining Return To Forever studio outtake.


As mentioned above, Performing This Week has been expanded to a second disc with additional audio from the original recorded shows along with bonus tracks featuring the Big Town Playboys. To be honest, the vocal tracks don’t do much for me here…no, the Reverend isn’t one of those purists who believes that Rod Stewart is the only appropriate singer for Beck. But the normally soulful Joss Stone over-emotes like crazy on an otherwise inspired performance of the Curtis Mayfield classic “People Get Ready,” her over-the-top vox drawing ready comparisons to Stewart, who sang the song on Beck’s 1985 album Flash, scoring a minor hit. Imogen Heap does a fine job with the Muddy Waters’ gem “Rollin’ and Tumblin’,” the band getting deep down in a dark groove behind Beck’s locomotive riffing and guitar squeals, her vocals as nasty as the backing instrumentation, providing the song with an eerie, swampy voodoo vibe.

Beck’s longtime friend and sometimes competitor Eric Clapton is featured on a pair of tunes, including Waters’ “Little Brown Bird.” Although the guitar interplay between the two legends is invigorating, Clapton’s lackluster vocals hit your ears more like a whisper than a howl. Better is his take on Willie Dixon’s “You Need Love,” the bones of which were appropriated years ago by the pair’s old Yardbirds mate Jimmy Page for Zeppelin. Above some massive riffs and a rocking rhythm track, Clapton attempts to hit something approximating Robert Plant’s vocals, displaying a spark of his old fire. Better still are the six performances featuring Beck and the Big Town Playboys, a fiery mix of blues, rockabilly, and reckless soul that benefits from Beck’s instinctive fretwork. No source or date is listed for these performances, but they sizzle like bacon fat, tracks like Gene Vincent’s “Race With The Devil” and Carl Perkins’ “Matchbox” shaking, rattling, and rolling like a juke-joint Saturday night. A scorching cover of the standard “Train Kept A Rollin’” is hot enough to have Johnny Burnette rocking in his grave.


If you’ve been wondering for even a minute why Jeff Beck received the honor of induction into the Rock & Roll Hall of Fame, Performing This Week should answer all of your questions. No single guitarist...not even a trailblazer like Jimi Hendrix...has done more to expand the vocabulary of the instrument than Jeff Beck. His technique is nearly flawless, his versatility simply awe-inspiring, and his encyclopedic knowledge of musical styles is beyond impressive.

With boundless imagination and no little sense of musical adventure, Performing This Week...Live At Ronnie Scott’s represents the wealth of excellence that has been the hallmark of Jeff Beck’s lengthy and creative musical career. The addition of a second disc chockfull of additional performances makes a good thing even better. The only question remaining is why did Eagle Rock wait so long to release these musical goodies on CD? Better late than never, I suppose, and if you didn’t grab up a copy of Performing This Week the first time round, here’s another chance to take the ride – this time with even more musical goodness. (Eagle Rock Records, released June 2, 2015)

Buy the CD from Amazon.com: Jeff Beck's Performing This Week... Live At Ronnie Scott's
Posted by Rev. Keith A. Gordon at Friday, May 22, 2015