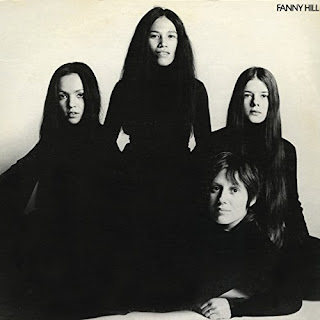 There has been a lot of recent hype (and no little notoriety) surrounding the Runaways and their status as the “first female rock ‘n’ roll band.” Although both Rock & Roll Hall of Fame inductee Joan Jett and her bandmate Lita Ford would emerge as successful solo artists in the 1980s, the members of the Runaways had yet to enter kindergarten when distaff rockers like Goldie and the Gingerbreads (featuring Genya Ravan) and the Pleasure Seekers (with the talented Quatro sisters) were rockin’ clubs from east coast to west.

Too often lost in the discussion is the band Fanny, who were the third all-woman rock ‘n’ roll group to be signed to a major record label (after the two above-mentioned bands), and the first to release a full-length album (their 1970 self-titled debut). Originally known as “Wild Honey,” the band changed its name to Fanny when producer Richard Perry got the L.A. based outfit a deal with Reprise Records. The band’s best-known line-up featured singer/guitarist June Millington and her sister, bassist/vocalist Jean Millington, drummer Alice de Buhr, and keyboardist Nickey Barclay. This is the group that would record Fanny’s first four albums, the quartet scoring a Top 40 hit with the title track of their second album, 1971’s Charity Ball.


Fanny Hill was the band’s third album, and the last to be overseen by superstar producer Perry, an eclectic boardman whose credits included albums by artists as diverse as Captain Beefheart, Tiny Tim, Ringo Starr, and Barbra Streisand, on whose 1971 album Barbra Joan Streisand the four members of Fanny played. Recording at the famed Apple Studio in London with engineer Geoff Emerick, Perry proved to be a sympathetic sounding board for the band, his careful production imbuing Fanny’s songs with a timeless quality while coaxing great performances out of the four musicians. Fanny could rock like a house on fire, but there’s an abundance of post-hippie folk-rock tunes to be found on Fanny Hill, as well as some well-done blues and R&B.

The album kicks off with an upbeat take on Marvin Gaye’s soul classic “Ain’t That Peculiar,” the band mixing a sly New Orleans R&B vibe with a bluesy undercurrent. Although June Millington’s breathless vocals are underserved by the mix, frequently overwhelmed by the instrumentation, her welcome slide-guitar licks are simply devastating, displaying why she was held in such high esteem as a guitarist by her male contemporaries. The song’s bluesy arrangement and full-bodied instrumentation, along with great harmony vocals and blastin’ sax courtesy of Bobby Keys, bring a whole other dimension to the familiar tune. “Knock On My Door,” an original song penned by keyboardist Barclay, switches gears entirely, Jean Millington’s lofty vox supported by complex and intriguing instrumentation on a wildly syncopated arrangement that includes some scorching guitar from June.

You’ve Got A Home


June Millington’s “You’ve Got A Home” is a wonderfully textured folk-rock song that, if it had been released a couple years later, would certainly have sat at the top of the charts alongside similar singer/songwriter fare from James Taylor or Joni Mitchell. The song’s gentle, pastoral sound is precious; its lyrics – a loving ode from a single mother to her son – are well-crafted, poetic, and thoroughly engaging. Supported by a sparse instrumental arrangement and tasteful acoustic and slide guitar, “You’ve Got A Home” is the heart and soul of the album. Sister Jean’s “Wonderful Feeling” is yet another song out of time, a bittersweet romantic ballad with smart, considered lyrics and no little emotion that fully displays the band’s instrumental skills with a melancholy arrangement and overall vibe that sounds like, but pre-dates mid-1970s Fleetwood Mac.

Barclay’s delightful “Borrowed Time” is an unabashed, up-tempo rocker with undeniable R&B roots. Written in response to the out-of-control egos of their male rock contemporaries, “Borrowed Time” offers up some of Barclay’s most inspired keyboard-pounding and brassy vocals, June’s fretwork soars in its imaginative elegance, and the addition of horns by Bobby Keys and Jim Price bring a Southern rock/Rolling Stones vibe to the performance that drives it over the top. A unique cover of the Beatles’ deep track “Hey Bulldog” brings a different perspective to the grand psychedelic-era gem. Fanny keeps the song’s original piano riff intact, as performed admirably by Barclay, but the band heaps on red-hot guitars and explosive percussion alongside the orchestral backing provided by June’s clavinet.


The band’s “Rock Bottom Blues” is a slippery slab o’ roadhouse grease that offers up some po’ boy (girl?) lyrics and a rockin’ arrangement that incorporates Jean’s spry bass line, June’s serpentine guitar licks, Barclay’s honky-tonk piano, and a rare vocal by drummer Alice de Buhr that, although trashed by critics at the time, is appropriately stressed and strained considering the lyrics while being badly lost in the mix. By contrast, “Sound and the Fury” is a country-styled tune that absolutely nails the overall sound and cadence of Byrds/Burritos-styled country-rock. June’s lyrics perfectly capture that cry-in-your-beer vibe, her vocal performance, while not incorporating a lick of twang, is nonetheless expressive and emotional. An un-credited Sneaky Pete provides tasty pedal steel for an additional bit of Bakersfield authenticity.

Barclay’s “The First Time” is a slice of Southern rock not dissimilar to Delaney & Bonnie, the song evincing a great mix of rock, soul, and gospel fervor with dancing keyboards, church-choir harmonies, and Jim Price’s subtle horn play. Barclay proves herself to be the strongest vocalist among the band’s four members, her turns at the microphone generally displaying more confidence and greater range, but with three talented songwriters among their ranks, Fanny’s ability to create a diverse blend of music was unparalleled at the time.

This Real Gone Music reissue of Fanny Hill tacks six bonus tracks onto the album’s original eleven songs, including the single version of “Wonderful Feeling” and an outtake of “Rock Bottom Blues” with de Buhr’s original vocal track, which is definitely stronger and more inspired than the version that Perry chose for the album. Notable among the bonus tracks are a raucous cover of Ike Turner’s “Young and Dumb,” which was released as a non-album single and features some devastating guitarplay by June alongside Barclay’s rough ‘n’ tumble keyboards, and the previously-unreleased “No Deposit, No Return,” a country-tinged Barclay original with twangy vocals, clever lyrics, and an undeniable shit-kickin’ grin.


As mentioned above, Fanny was definitely a band (slightly) ahead of its time, and I can easily see Fanny Hill being a chart-gobbling monster if it had been released in, say, 1975 or ’76 instead of 1972. The album’s overall singer/songwriter direction is bolstered by the band’s instrumental ability to sound big or go soft, to tear the roof off the sucker or to strum and sing in a folkish vein. Featuring an unsung, talented singer in keyboardist Nickey Barclay and two underrated vocalists in the Millington sisters, Fanny also had the benefit of three gifted songwriters among its four skilled musicians, and a world-class guitarist in June Millington. Widely considered to be the band’s best recording, Fanny Hill is well worth your time to check out if you’re a fan of 1970s-era singer/songwriter styled music.

Unfairly lost in the shuffle (the early 1970s produced a wealth of great rock ‘n’ roll), Fanny Hill peaked at only #135 on the charts. Fanny worked with Todd Rundgren as producer for their 1973 album Mother’s Pride, which was the last to feature the band’s original line-up. June Millington and Alice de Buhr left the band after this fourth album, Fanny adding guitarist Patti Quatro from the Pleasure Seekers and drummer Brie Brandt as Jean kept the band going for one more shot at the brass ring, 1974’s Rock and Roll Survivors. The Millington sisters continue to play music as Fanny from time to time, but the gorgeous Fanny Hill is the foundation of the band’s enduring musical legacy. Grade: A- (Real Gone Music, released June 29, 2015)