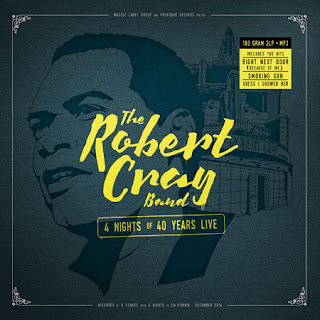 It’s my personal feeling that legendary blues guitarist Robert Cray has been somewhat underserved when it comes to the release of live material during his lengthy career. With nearly two dozen albums to his credit since his acclaimed 1980 debut, Who’s Been Talkin’?, only three of these discs have represented the guitarist’s spellbinding, dynamic live performances, all of ‘em released in a cluster by Vanguard Records between 2007 and 2010.

Although there’s certain to be some tasty live morsels hidden away in the vaults somewhere, at least loyal fans have something concrete to look forward to on August 28th, 2015 when Provogue Records releases Cray’s 4 Nights of 40 Years Live, a career-spanning set comprised of both new live recordings and archive material. 4 Nights of 40 Years Live will be available in a number of formats, including a two-CD set with accompanying DVD or Blu-ray disc, a two-LP vinyl album with download card, and straight digital download.

The first disc features live performances recently put to tape by Cray and his current band, including bassist Richard Cousins, keyboardist Dover Weinberg, and drummer Les Falconer, thirteen songs recorded at four different venues in the Los Angeles area. The tracklist represents a cross-section of Cray’s career, truly spanning the decades by offering songs like “Bad Influence,” from the 1983 album of the same name; “Right Next Door (Because of Me),” from 1986’s Strong Persuader; “These Things,” from 1990’s Midnight Stroll; and “I’ll Always Remember You,” from the more recent LP Nothin But Love. Steve Jordan returns to the producer’s chair for the album, which includes guest appearances from the Fabulous Thunderbirds’ Kim Wilson, harmonica wizard Lee Oskar, saxophonists Trevor Lawrence and Tom Scott, and trumpeter Steve Madaio.

Disc two takes the listener on a ride in the “Wayback Machine,” featuring performances from Cray’s appearance at the 1982 San Francisco Blues Festival and a 1987 appearance on the Dutch TV show Countdown, including tracks like “Smoking Gun,” “Too Many Cooks,” and “T-Bone Shuffle.” The accompanying DVD/Blu-ray disc offers 94 minutes of Cray and crew’s red-hot live performances from the four L.A. shows along with video from the aforementioned S.F. Blues Festival and Countdown TV broadcast as well as interviews with Cray friends and admirers like Bonnie Raitt, Jimmie Vaughan, Eric Clapton, Keith Richards, and Buddy Guy.

Although we’ll always like to hear more live music from the Cray and his band, the deluxe set that is 4 Nights of 40 Years Live goes a long way towards presenting the guitarist’s on-stage legacy in a proper light.

Check out the trailer for the album below and then get on over to Amazon.com and order the album: Robert Cray's 4 Nights of 40 Years Live (2CD + DVD)