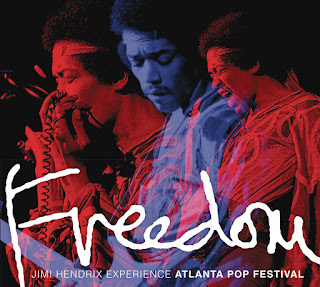 Jimi Hendrix fans have a lot to be happy about this year – Experience Hendrix, the late guitarist’s estate, and Sony Legacy have finally reissued the live performance from the Atlanta Pop Festival 1970 as a long-anticipated, budget-priced two-disc set (Freedom: Live At The Atlanta Pop Festival). The new Atlanta Pop Festival CD expands what was heard on the Stages box set, which has been out of print for nearly two decades, adding five additional tracks from the original concert, including fan faves like “Red House” and “Hey Joe.”

On October 30th, 2015, Hendrix fanatics will have another reason to whirl like a dervish when Sony Legacy releases the Electric Church documentary film on DVD and Blu-Ray. The film debuted on Showtime in early September, but the commercial home video release features bonus content not included on the broadcast. Documenting the event considered by many to be the “Southern Woodstock,” the film tells the behind-the-scenes story of the Atlanta Pop Festival and Hendrix’s performance in front on the largest audience of his career.

The Atlanta Pop Festival, held over the July 4th holiday weekend in 1970, was the result of the efforts of Atlanta promoter Alex Cooley. Attempting to create a true cultural event, Cooley signed talents like Bob Seger, the Allman Brothers, and blues legend-in-the-making B.B. King to perform at the festival, but it was Hendrix’s Independence Day appearance that created rock music history. Electric Church features 16mm film footage of Hendrix’s performance with Experience bandmates Billy Cox and Mitch Mitchell, including songs like “Hey Joe,” “Voodoo Child (Slight Return),” “Purple Haze,” and “Room Full of Mirrors” as well as a scorching read of “The Star Spangled Banner.”

Electric Church also includes interviews with Cox and Mitchell, as well as fellow musicians like Paul McCartney, Steve Winwood, Derek Trucks, Susan Tedeschi, and festival organizer Cooley, among others. The film provides further insight into the genius that was Jimi Hendrix and serves as another important chapter in the career of, perhaps, the most deeply documented artist in rock ‘n’ roll aside from individual members of the Beatles and the Rolling Stones.
Posted by Rev. Keith A. Gordon at Sunday, September 20, 2015