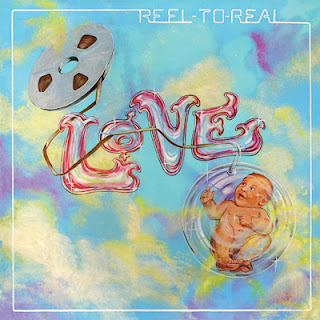 Psychedelic folk-rock pioneers Love have continued to pick up fans decades after their mid-to-late 1960s artistic peak. The band’s 1967 magnum opus, Forever Changes, is widely revered as one of the most creative and influential albums in rock ‘n’ roll history, and Love frontman Arthur Lee has since become a cult idol heralded as a genius, a status that has only grown since his death in 2006.

While copies of Love classics like Forever Changes and Da Capo are readily available and easy to find for even the novice collector, copies of late-period Love albums, as well as Lee’s infrequent solo albums, have become increasingly more difficult to dig up. Thanks to the good folks at High Moon Records, Love’s previously-unreleased 1973 album Black Beauty was finally made available some 40 years after its recording. The boutique label strikes gold again with its plans to reissue another long-lost Love effort, Reel to Real.

On November 27th, 2015 High Moon Records will reissue Reel to Real on CD and digitally, with a vinyl LP reissue following on February 19th, 2016. Featuring eleven red-hot tracks, Reel to Real was originally released in 1974 by RSO Records. High Moon’s deluxe CD package offers re-mastered audio from the original tapes and a dozen bonus tracks, most of which are previously-unreleased, and includes a full-color, 32-page booklet with an essay by Rolling Stone magazine’s David Fricke as well as rare, unpublished photos. The label’s LP reissue will be pressed on high-quality RTI vinyl and will include a full-color, 28-page LP-sized booklet as well as a download card for the full album and bonus tracks. The digital download will include a full-color, 26-page PDF booklet.

A major label follow-up to the indie-produced, ultimately unreleased Black Beauty, Love’s Reel to Real featured the same band as its predecessor: guitarist Melvan Whittington, bassist Robert Rozelle, and drummer Joe Blocker – a talented lineup that Lee referred to as “cats who can play funky and rock” – who were joined by guitarist John Sterling. The album also included guest appearances by guitarists Harvey Mandel (former Canned Heat guitarist and solo artist) and Howard “Buzzy” Feiten (who had played with Paul Butterfield and Bob Dylan).

Availed of a larger budget courtesy of RSO, Love recorded an underrated collection of blues, rock, funk, and soul that is a timeless representation of Lee’s immense musical vision. The bonus tracks provided the High Moon reissue of Reel to Real are sourced from the original sessions for the album and include alternate takes and mixes, live in-studio rehearsals, and four previously-unknown Lee originals: “Do It Yourself,” “I Gotta Remember,” “Somebody,” and “You Gotta Feel It,” the first three of which are said to be fully-produced rockers.

I tracked down a copy of Black Beauty on CD a few months ago and was pleased by the effort that went into the production and packaging; working from original tapes, I expect Reel to Real to sound even better. Reel to Real is available from the High Moon Records website.

Reel to Real - original album tracks:
1. Time Is Like A River
2. Stop The Music
3. Who Are You?
4. Good Old Fashion Dream
5. Which Witch Is Which
6. With A Little Energy
7. Singing Cowboy
8. Be Thankful For What You Got
9. You Said You Would
10. Busted Feet
11. Everybody’s Gotta Live

All Reel to Real bonus tracks previously unreleased except for the "You Said You Would" single mix
Posted by Rev. Keith A. Gordon at Friday, September 25, 2015