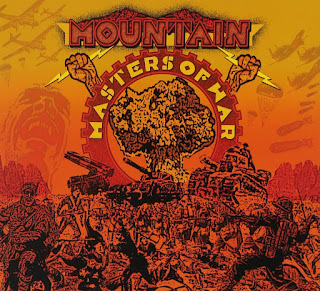 Here’s a real mutha for ya! Mountain, they of larger-than-life axeman Leslie West and even larger riffs, have created in Masters of War a damn-near-perfect Bob Dylan tribute. Just to prove that musical is cyclical, the ‘70s-era hard rock mastodons have strung together a dozen fiery performances of eleven great Dylan tunes (“Blowin’ In The Wind” is availed of both heavy and soft acoustic readings) that, intentional or no, through choice and sequencing, represent nothing less than THE FIRST GREAT ‘00s PROTEST ALBUM!!!

Before thou believe that I exclaimeth too much, just check out the band’s opening dirge, a powerful reading of “Masters of War” with guest vocalist Ozzie Osbourne. Swapping vocals with the Ozman, West’s tortured howl serves as a counterpoint to Ozzie’s otherworldly black cat moan, the former Sabbath dirigible sounding like the Grim Reaper slipping through your bedroom window, with West’s omnipresent fretwork serving as the shadow’s deadly scythe. If this eerily prescient revisiting of the Dylan classic doesn’t send chills down your spine, then you’ve already assumed room temperature.

Rest assured, the remainder of Masters of War hits yer eardrums like a frayed wooden mallet with a cold chisel chaser. With guitarslinger Warren Haynes drenching the tune with some ultra-nasty six-string funk, West’s take on Dylan’s “Serve Somebody” kicks like a mule breaking out of its stall, the big man’s potent vocals sounding like a rent-a-preacher at a Southern tent revival. The “heavy” version of the ‘60s anthem “Blowin’ In The Wind” is infected with a contagious sense of yearning and benefits from West’s trademark slash ‘n’ burn fretwork, while the “soft” acoustic version is reverent and restrained without losing any of its power, displaying the true worth of West’s talents.

“Everything Is Broken” is the sort of blues-based, guitar-driven booger-rock that Mountain made its bones with, while the first authentic rap song – “Subterranean Homesick Blues” – is reinvented as a stomp-and-stammer rave-up with scorching, swirling guitar and the heaviest underlying rhythms this side of the graveyard. “The Times They Are A Changin’” strips the song down to Dylan’s Mississippi bluesman roots, with Haynes’ slowly moaning guitar, some fine Gospelish piano, and a cool vocal performance by West. “Seven Days” ramps up the octane a hundredfold, West’s bellowed thunderstorm vocals no match for his stinging, lightning strength axe-mangling.

Along for the ride alongside the last true rock guitarist is West’s blood-brother Corky Laing, the talented drummer keeping the beat and adding a complexity and dimension to the music that you just can’t program into a machine, ever. Mountain’s novel approach to “Like A Rolling Stone” has Laing soloing with spoken, rather than sung, electronically-altered vocals accompanied by nothing more than a heavily syncopated drumbeat. Kenny Aaronson, from the other great power-trio of 1970, Dust, holds down the bass line on most of the songs with his heavy metallic perspective on the bottom chords. Guns-for-hire like Todd Wolfe and Brian Mitchell lend their talents to Masters of War while bassist Ritchie Scarlet, who often tours with the band, throws down on a couple of the numbers.

Throughout the grooves on Masters of War, West waxes metallic Sturm und Drang, dancing to the different drummer of his own Marshall-blasted apocalypse. Will it sell? Doubtful…maybe to the a dwindling faithful rapidly falling prey to old age and infirmity…but to the young listener fed since birth on the teat of corporate radio, corporate labels and corporate pabulum, these songs might sound like vinegar in their buttermilk. It’s their loss…the rest of us can just crank up the volume way past ‘10’ and let the waves of righteousness wash right over our riff-hungry ears... (Big Rack Records/Megaforce, released July 24, 2007)

Buy the CD from Amazon.com: Mountain's Masters of War