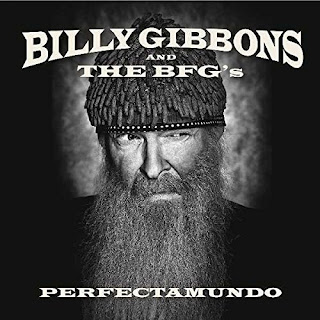 For nearly half a century, Billy Gibbons has fronted ZZ Top, that ‘little ol’ band from Texas.’ If only for acclaimed ZZ Top albums like Tres Hombres, Deguello, and Eliminator, Gibbons’ place in the rock ‘n’ roll history book would be assured. But the talented singer, songwriter, and guitarist extraordinaire has carved his legacy in stone with a rusty penknife via decades of constant touring and by (literally) showing up to play on recording sessions by anybody that takes a chances and rings him up. Through the years, Gibbons has lent his distinctive fretwork to a veritable ‘who’s who’ of rock ‘n’ blues music, from John Mayall, B.B. King, and Shemekia Copeland to Joe Bonamassa, Ministry, and Gov’t Mule, among many others.

So why, this late in his career, would Gibbons deem it necessary to record a solo album like Perfectamundo? Gibbons has often brought his fascination with other genres of music to experiments with his longtime band, whether it’s the new wave synthesizers that modernized ZZ Top’s sound during the Eliminator and Afterburner era or his flirtation with hip-hop style on the band’s 2012 album La Futura, to cite but two examples. Gibbons has been interested in Latin and Afro-Cuban music for some time, studying percussion with Mambo legend Tito Puente back in the day and, more recently, performing alongside Puerto Rican singer Luis Fonsi at the 7th Latin Grammy® Awards in 2006.


Dominated by Afro-Cuban rhythms and other Latin music influences, Perfectamundo was recorded, I’d guess, primarily to provide Gibbons with a way to get his groove on without being kneecapped by the obvious restrictions of playing with a three-piece blues-rock band. Working again with musician and producer Joe Hardy (who co-produced La Futura), Gibbons put together a multi-cultural band, The BFG’s, for this ‘solo debut,’ allowing him to flesh out his trademark sound and providing room for the guitarist to explore creative turf that he couldn’t with his regular band. ZZ Top fans picking up a copy of Perfectamundo expecting a reprise of “La Grange” or “Sharp Dressed Man” are going to be surprised – not kindly, perhaps – by Gibbons’ solo experiment.

Gibbons’ bold, ballsy fusion of sultry rhythms and his blues roots works more often than not, the five-piece band and Gibbons’ Latin influences serving as a blank canvas on which the guitarist can paint as he wishes. The album-opening cover of Slim Harpo's “Got Love If You Want It” is a perfect example of the experiment done right, Gibbons’ breathless, subdued vocals complimented by colorful rhythms, along with the dueling B-3s of keyboardists Mike Flanigin and Martine GuiGui, as well as his own spicy fretwork. A cover of the Roy Head hit “Treat Her Right” follows a similar blueprint, drummer Greg Morrow’s excellent percussion supported by bassist Alex Garza’s righteous bass lines and Gibbons’ fluid, soulful vocals. The guitarist’s original “Sal Y Pimiento” strays further from his blues-rock roots; the largely instrumental jam is an exhilarating showcase for the band’s talents, a rollicking tune that one could expect to hear blasting from the windows of a Mexico City bar.

Pickin’ Up Chicks On Dowling Street


Other songs on Perfectamundo cautiously mix ZZ Top’s lyrical bravado with an enticing soundtrack. A bawdy story-song, “Pickin’ Up Chicks On Dowling Street” is the sort of thing that one would expect from late 1970s/early ‘80s era Gibbons, but here its transcends the blues-rock genre to travel worldwide, the blazing keyboards and foot-shuffling percussion providing a high-energy counterpoint to Gibbons’ scorching guitar. However, the musical experimentation falls flat on songs like “Quiero Mas Dinero” (translates as “I Want More Money”), where Garza’s awkwardly rapped vox are shockingly at odds with Gibbons’ brief, but otherwise stellar guitarplay. The song’s too-busy instrumentation rapidly jumps from one notion to another, with mere scraps of brilliance shining through the fog until Gibbons’ inspired, Chicago blues-styled six-string vamp walks us out of the darkness.

The album’s title track suffers from a similar fate, the song introduced by a booming cacophony before descending into Garza’s trite spoken vocals. It’s a shame, too, ‘cause the song’s funky instrumental undercurrent is simply contagious. On the other hand, a cover of the Big Joe Williams (by way of Lightnin' Hopkins) classic “Baby Please Don’t Go” is afforded a new coat of paint, Gibbons and crew re-inventing the blues standard much as Williams himself did when he recorded the song back in 1935. With a big-beat backdrop, Gibbons’ growling vocals dance atop the menacing instrumentation, the B-3 keys kicking up a bit of soul while Gibbons’ short solos carpet-bomb the mix. The invigorating “Q-Vo” is a mostly-instrumental jam, an energetic hybrid of Booker T & the MG’s inspired groove and John Lee Hooker styled boogie-blues, with lively keyboards clashing with shards of bluesy guitar and fatback bass above a rock-solid rhythmic foundation, closing the album on a high note.


Billy Gibbons’ Perfectamundo grows on you, kind of like kudzu – on first listen, my impressions were along the line of “what the hell was he thinking?” Two, three spins down the road and my interest was piqued, and by the fifth or sixth time putting Perfectamundo on the box, I found myself grinning in spite of myself. Gibbons expands his musical palette here, allowing his guitar greater freedom to soar into new territory while exploring different tones and textures with his lyrics and singing.

The BFG’s – named after Gibbons’ line of personally-branded BBQ and hot sauces – are a top-notch musical outfit that effortlessly blends Gibbons’ blues-rock leanings with more exotic fare, and save for the embarrassing hip-hop stylings forced into the mix with a crowbar on a couple of songs, Perfectamundo is an engaging, and entertaining – if surprising – solo debut from one of rock music’s legendary guitarists. Grade: B- (Concord Records, released November 6, 2015)