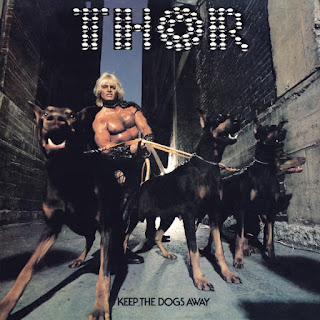 In the annals of heavy metal, which counts among its ranks such notorious figures as Burzum and King Diamond, none are more infamous than the almighty Thor! Born Jon Mikl Thor in Vancouver, Canada in 1953, Thor is a professional bodybuilder, part-time actor and screenwriter, and rock ‘n’ roll legend. After winning the bodybuilding title of Mr. Junior Canada (one of many such honors he’s received in the U.S. and Canada), Thor decided to become a rock ‘n’ roll star. Proclaiming himself “The Legendary Rock Warrior” – basing his entire image on the Norse God of Thunder whose name he shares – Thor formed his first band in 1973.

His performances during the ‘70s were part hard rock/heavy metal and part performance art (he’d often perform acts of strength on stage as the band bashed away); Thor took Alice Cooper-inspired theatrics to a whole other level. Recording his debut LP in 1976-77, Thor subsequently licensed the album to RCA Records, which released Keep The Dogs Away in 1977. The album went Gold™ in Canada but failed to chart in the states, but Thor kept banging away at the gong, releasing albums and EPs throughout the 1980s, finding a new audience as heavy metal fandom blossomed during the decade. Thor temporarily retired from music in the late ‘80s to concentrate on film, but came roaring back in the late ‘90s and continues to record and perform sporadically until this day.

On May 13th, 2016 the good folks at Cleopatra Records will reissue Thor’s underground metal classic Keep The Dogs Away as both a three-disc deluxe edition and a triumphant vinyl version. Long out of print, Thor’s Keep The Dogs Away comes as a triple-disc CD set packaged in a six-panel digipak with alternative cover art and liner notes by longtime fan Brian Kehew (co-author of Recording The Beatles). The first disc reprises the original album, disc two features 22 rare and unreleased songs, while disc three is a bonus concert DVD offering a vintage 1980 performance by the metal legend. The black wax version of Keep The Dogs Away is a faithful recreation of the original vinyl album with a foldout poster and printed inner sleeve.

The day after, on May 14th, there will be a four-hour multi-media event held at the Highline Ballroom in New York City in celebration of the album’s release. Sponsored by Thor, radio and TV personality Eddie Trunk, and Fabio Productions the event will include a first time ever full concert performance of Keep The Dogs Away as well as a theatrical screening of the I Am Thor documentary film, a special Thor museum display, and a second concert performance of Thor’s most popular songs with special guest performers.

Buy the CD from Amazon.com: Thor's Keep The Dogs Away