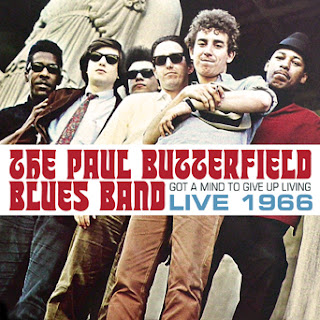 Due to a quirk in European copyright laws, there’s a steady stream these days of semi-legit CD releases featuring rare, live performances by legendary artists like Steve Miller, Warren Zevon, Randy California, and Country Joe & the Fish (and those are only those that I’ve recently acquired). Caught in some gray area between authorized releases and underground bootlegs, these loophole CDs typically use FM radio broadcasts and/or live-in-the-studio performances as their source, so the sound quality of these dodgy discs is frequently lo-fi, and there’s typically little in the way of liner notes, photos, or other perks expected by those fans who still buy compact discs.

As much as we hardcore collectors may appreciate these releases, you can’t really beat the quality of the albums you get from a dedicated archive label like Real Gone Music. On June 3rd, 2016 the label will release the often-bootlegged but never surpassed Got A Mind To Give Up Living – Live 1966 by the legendary Paul Butterfield Blues Band. The first legitimate release of this classic performance, Real Gone has done Got A Mind To Give Up Living – Live 1966 up right, including rare photos and band memorabilia as well as liner notes by Chris Morris including new quotes from band members Elvin Bishop and Mark Naftalin.

Got A Mind To Give Up Living – Live 1966 presents the earliest incarnation of the Paul Butterfield Blues Band, featuring the band’s namesake on vocals and harmonica, and the incredible fretwork of guitarists Bishop and Michael Bloomfield. Recorded live in May 1966 at Boston’s Unicorn Coffee House, the band’s performance was two months before the release of their classic East-West album and features songs from that album, as well as tunes that would be recorded for subsequent albums, and a pair of previously-unreleased songs that were never recorded by the band. A significant historical find, Got A Mind To Give Up Living – Live 1966 is one that every blues fan is going to want to check out. 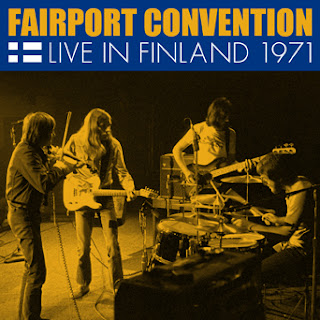 But Real Gone isn’t just rolling the Butterfield CD down the distribution highway and taking the rest of the month off, nosirree! Also on June 3rd, the label will be rescuing another gem from obscurity when they release Fairport Convention’s Live In Finland 1971on CD. Legitimizing another fan-fave bootleg, Live In Finland 1971 features the lesser-known – but no less talented – Fairport Convention line-up of guitarist Simon Nicol, bassist Dave Pegg, fiddler Dave Swarbrick, and drummer Dave Mattacks. This is the roster that recorded a pair of acclaimed but underrated studio albums in 1971’s Angel Delight and the conceptual “Babbacombe” Lee.

This post-Richard Thompson incarnation of the band shared vocals and, as displayed by Live In Finland 1971, they leaned harder toward the rock side of their trademark British folk-rock sound. Capturing the band performing in support of the U.K. Top 10 charting Angel Delight, Live In Finland 1971 features a set that includes fan favorites like “Sir Patrick Spens” and “Matty Groves” as well as rare tracks like “Mason’s Apron” and “Sir B. McKenzie’s Daughters Lament.” The Real Gone Music release of Live In Finland 1971 includes liner notes by noted rock historian Richie Unterberger that feature quotes from band members Simon Nicol and Dave Pegg as well as rare photos and memorabilia from the band’s archive. Both the Butterfield and Fairport sets feature re-mastered sound courtesy of Mike Milchner at SonicVision…so you really can’t go wrong with Real Gone!

Paul Butterfield Blues Band - Got A Mind To Give Up Living – Live 1966 setlist:

Buy the CD from Amazon.com: Paul Butterfield Blues Band's Got A Mind To Give Up Living

Buy the CD from Amazon.com: Fairport Convention's Live In Finland 1971
Posted by Rev. Keith A. Gordon at Monday, April 25, 2016