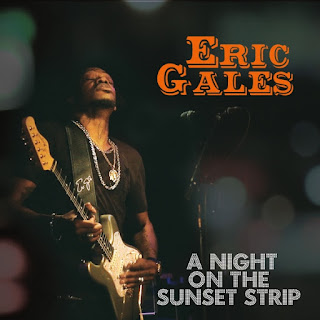 Since discovering Memphis blues-rock guitarist Eric Gales back in 1991 with the release of his debut album (The Eric Gales Band, recorded with his brother Eugene), the Reverend has been a big fan. Gales didn’t disappoint with his sophomore effort, either, Picture of a Thousand Faces kicking out the blues-rock jams with even more energy and vitality than Gales’ debut.

I’ve kept track of the talented guitarist for a quarter-century now as he’s released fiery, critically-acclaimed albums like 2001’s That’s What I Am, 2006’s Crystal Vision, and 2011’s Transformation, as well as the two projects he recorded with King’s X bassist dUg Pinnick and former Mars Volta drummer Thomas Pridgen (2013’s Pinnick Gales Pridgen and the following year’s PGP2). Throughout all his recordings, Gales has displayed a knack for innovation, an unquenchable musical curiosity, and an adventuresome nature that he shares with one of his major influences, Jimi Hendrix.

Although he tours constantly, I’ve yet to witness Eric Gales perform live…a sad situation only partially redeemed by the upcoming release of the guitarist’s A Night On The Sunset Strip. A two-disc CD/DVD concert set scheduled for July 8th, 2016 release by the good folks at Cleopatra Records, Gales’ A Night On The Sunset Strip documents a particularly explosive performance by the guitarist and his band at the notorious Hollywood venue the Viper Room.

During the Hollywood show, Gales performed material from his growing back catalog, including fan favorites like “Block The Sun” and “The Open Road,” as well as songs from his recent 2014 album Good For Sumthin’ and a very cool cover of the Rolling Stones’ classic “Miss You” (full album track list below). If you’re not hip to this extraordinary blues-rock fretburner, you owe it to yourself to check out Eric Gales’ A Night On The Sunset Strip…you’ll thank me later!

Buy the CD from Amazon.com: Eric Gales' A Night On The Sunset Strip