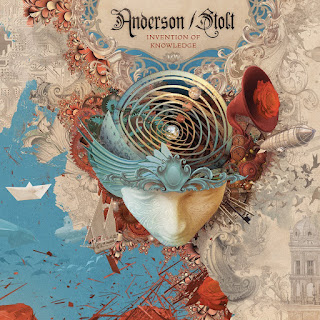 It’s a match made in heaven for the diehard progressive rock fan – former Yes vocalist and bona fide prog-rock legend Jon Anderson collaborating with Flower Kings founder, guitarist Roine Stolt. Both men have been an essential part of an iconic prog band, and both have dallied with outside projects that took them out of their comfort zone (Anderson on a series of collaborations with Greek electronic music pioneer Vangelis and Stolt with Transatlantic and the Tangent). Both Anderson and Stolt have enjoyed a modicum of success with their solo careers, although both remain firmly identified with their well-known bands.


So perhaps it was fate that brought them together – or maybe just rock ‘n’ roll. The two met in 2014 on a Progressive Nation at Sea cruise when Transatlantic drummer Mike Portnoy suggested that the band should perform a couple of songs with Anderson. The performance ended up being an hour long jam on Yes classics like “Long Distance Runaround,” “And You And I,” and “Starship Trooper.” Stolt found an easy musical chemistry with Anderson and the two artists ended up creating Invention of Knowledge, a four-song prog-rock masterpiece with extended suites and more than enough exciting and innovative music to thrill even the hardcore progger.

Working long-distance via the internet, Anderson would email his song ideas and vocals for his co-producer Stolt to assemble and expand upon in the studio. Stolt added some of his most imaginative fretwork to date to the material, while a band consisting of Flower Kings members Jonas Reingold (bass) and Felix Lehrmann (drums) as well as keyboardist Tom Brislin fleshed out the songs and added their own impressive talents to the mix. Backing vocals on several tracks were provided by Nad Sylvan and Pain of Salvation’s Daniel Gildenlow, who were joined by the feminine voices of Anja Obermayer, Maria Rerych, and Kristina Westas. The resulting performances are simply breathtaking in both their invention and execution.

The title track, comprised of three suites, enters your consciousness with shimmering vocal harmonies; Anderson’s voice eventually soars above the gloss to take center stage alongside Stolt’s piercing guitar licks. The song’s instrumentation is lush and gorgeous, but Stolt’s fretwork really shines, dancing lively across the mix and perfectly complimenting Anderson’s lofty, familiar vocals. The second suite depends a lot on Anderson’s voice, which never falters in telling his tale while the band weaves golden threads of sound behind him, while the third suite offers up more of Anderson’s ethereal vocals accompanied by heady, jazz-rock fusion styled guitar lines.


The second song on Invention of Knowledge, “Knowing,” is broken down into two suites, with a gentle opening based on Anderson’s echoed vocals and swirls of psych-drenched instrumentation and interesting percussive rhythms. Brislin’s keyboards are brought to the fore here, the skilled musician evoking memories of Rick Wakeman with his hauntingly beautiful keyboard flourishes. The first suite offers some classical influences with orchestration and signature changes that dart to and fro, Stolt’s guitar more subdued in the mix but evincing some interesting stylistic choices which enhance, rather than distract, from the business at hand. Suite two, titled “Chase and Harmony,” opens with Brislin’s charming piano-play, which offers a nice counterpoint to Anderson’s whimsical vocals and the dreamlike instrumentation that runs like a river beneath the performance.

“Everybody Heals” offers three exciting suites, a lonesome violin riff exploding into full instrumentation on the first section before Anderson’s vocals kick in and provide a road map for the band to follow. Lehrmann’s invigorating percussion work here provides a canvas on which Stolt paints his colorful and multi-textured guitar playing. Although it rises and falls beneath the instrumentation, Stolt’s guitar is a vital part of the song, accompanying Brislin’s similarly deep-tracked piano. The song’s brief second section, titled “Better By Far,” veers musically only slightly from the preceding suite, with Stolt’s weepy guitar licks matched by Brislin’s chiming keyboards while “Golden Light,” the third suite, is operatic in scope and cacophonic in nature with some fascinating, clamorous instrumental swerves that will keep the listener on their toes.

Invention of Knowledge closes out with “Know,” a sweeping, eleven-minute fantasy that offers up more of Anderson’s gorgeous vocal gymnastics and a cinematic soundtrack for his lyrics with tinkling piano notes, flowing guitars and jagged solos, squalls of synthesizer, and sparse rhythms that altogether create a mesmerizing performance that jets by far too quickly. Throughout all of these performances, much like with the Flower Kings’ best efforts, Jonas Reingold’s understated and fluid bass lines provide the foundation on which all the other musical ideas are built.


After four-and-a-half decades, I’ve remained a loyal Yes fan, and I find much of the band’s 1970s-era catalog to be the timeless, still-exciting definition of progressive rock. Jon Anderson’s solo material is equally enchanting, his unique vocal skills imbuing both his band and solo efforts with an identifiable and magical aura. I’ve been a longtime fan of the Flower Kings as well, Roine Stolt’s contributions to prog-rock guitar easily on a par with Yes’ Steve Howe and Genesis’ Steve Hackett.

Needless to say, I was excited to hear of a musical collaboration between these two talented artists, and they do not disappoint. Invention of Knowledge is as timeless as anything that Yes or the Flower Kings have released through these many decades, a musical throwback to the hallowed, halcyon prog-rock era of the ‘70s but still retaining a contemporary sound and edge. Anderson and Stolt – modern-day musical alchemists – have delivered an incredible work that sits proudly with the classic albums of progressive rock history. Grade: A+ (Inside Out Music, released July 8, 2016)

Buy the CD from Amazon.com: Anderson Stolt's Invention of Knowledge