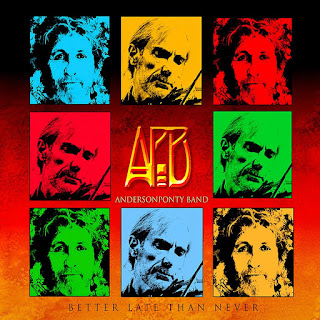 They’re both bona fide legends – singer/songwriter Jon Anderson and violinist Jean-Luc Ponty. Anderson, of course, spent 35 years fronting prog-pop chartbusters Yes, but has also enjoyed a lengthy and successful solo career as well as working on ground-breaking collaborations with musicians as diverse as Rick Wakeman, Vangelis, and Kitaro (plus there was one solid album by the Yes spin-off band Anderson Bruford Wakeman Howe).

Ponty may be less well-known to rock music fans, but he’s no less a talent. A traditional jazz violinist who had flirted with bop and free-jazz styles, Ponty pioneered the use of electric violin in both jazz and rock music; he helped create and define jazz-rock fusion during his stint with John McLaughlin’s Mahavishnu Orchestra; and he left his mark on the world of rock ‘n’ roll with his tenure as a member of Frank Zappa’s Mothers of Invention. As a solo artist, Ponty earned acclaim with a slew of eclectic late 1970s albums like Imaginary Voyage and Cosmic Messenger; while in the 1980s and ‘90s, Ponty broke new ground by incorporating synthesizers and other electronics with his violin to create an invigorating and unique sound.


Given their past accomplishments, as well as a propensity for working well with others, it comes as no surprise that these two talents would join their creative mojos together and form the Anderson Ponty Band. Anderson and Ponty are backed by members of Ponty’s touring band, including guitarist Jamie Glaser (whose parts were dubbed in later…long story), bassist Baron Browne, keyboardist Wally Minko, and drummer Rayford Griffin – who, between them all, have experience playing with folks like Chick Corea, Billy Cobham, and Stanley Clarke as well as pop idols like Pink, Toni Braxton, and Michael Jackson.

Together, this is the group that created Better Late Than Never, recording a live performance at the Wheeler Opera House in Aspen, Colorado in September 2014. The fourteen-track, hour-long set is an invigorating mix of prog, pop, and fusion as the band revisits both songs from Anderson’s time with Yes and his solo career as well as tunes from Ponty’s vast back catalog. The brief instrumental intro that opens Better Late Than Never draws upon familiar musical themes from Yes, but the band jumps headfirst into “One In The Rhythms of Hope,” Anderson’s angelic vocals a fine match for Ponty’s otherworldly violin riffs. I particularly like Griffin’s subtle use of what sound like vibes at key moments in the arrangement.

Renaissance of the Sun


The band’s take on the Yes classic “Owner of A Lonely Heart” is generous with new flourishes, the band re-interpreting the song and providing it with just as much muscle as the original, but with Ponty’s buzzsaw violin providing a bit of rough grit to the performance. The shimmering, dancing “Listening With Me” provides a contrast to its predecessor, but the song is no less intense, Anderson’s impressive vocal gymnastics moving perfectly with the instrumentation’s fluid time changes. The exotic rhythm of the Yes deep cut “Time and A Word” is exaggerated and even funkier thanks to a flexible rhythm section and Ponty’s hypnotic violin notes.

“Infinite Mirage” is a breathtaking fusion of Anderson’s songwriting skills and Ponty’s instrumental talents. Anderson takes the Ponty song “Mirage” from his Enigmatic Ocean album and adds words, his silken vocals punctuated by Ponty’s high-flying performance. The free-flowing “Renaissance of the Sun” is a stunning example of the assembled band’s virtuosity, the song masterfully blending electrifying jazz-rock fusion with 1970s-era prog-rock Yes in the creation of a truly impressive performance. Ponty’s violin is threaded throughout, Minko’s mournful piano provides an emotional counterpoint, and Anderson’s vocals add light and texture. The Anderson Ponty Band’s reading of the classic rock radio staple “Roundabout” lacks Yes’s glorious harmonies and Rick Wakeman’s classically-manic keyboards, but otherwise the band acquits itself well and delivers an invigorating take on a familiar tune.


The Anderson Ponty Band’s two-disc Better Late Than Never includes a ten-song concert DVD that features some of the best performances from the show, the band playing against a cool video backdrop with changing graphics. One minor cavil for what is otherwise an excellent collection of music – evidently Jamie Glaser’s fretwork was edited in using some high falutin’ production wizardry, replacing original guitarist Jamie Dunlap’s performance. You can watch the DVD and not only is Dunlap not introduced as part of the band, his appearance onstage is downplayed by the video editing.

The aforementioned complaint aside, as good as Glaser’s guitar playing is – overdubbed or not – the focus on Better Late Than Never is on Anderson’s soaring vocals and Ponty’s raging violin play. Both men definitely bring their best game to play on these performances, which serves to highlight the intrinsic talents of both. Anderson and Ponty have been talking about working together for 30 years. In this case, “better late than never” is an appropriate album title, the Anderson Ponty Band delivering a dynamic and entertaining live set that is one of the best things to happen to prog-rock in decades. Grade: A- (Liaison Music, released September 25, 2015)