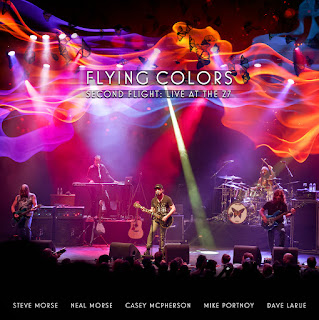 On November 13th, 2015 Music Theories Recordings (through the Mascot Label Group) will release Second Flight: Live at the Z7 from prog-rock supergroup Flying Colors. The album – the band’s fourth and its second live recording – will be released in multiple formats, including CD, Blu-ray and DVD, vinyl album (with mp3 download card), and as a digital download through online services like iTunes and Pono, among other formats.

Second Flight documents a 2014 performance by the band at Switzerland’s Z7 venue, which was captured on film and features material from Flying Colors’ second studio album, Second Nature. The band had only performed seven times before this night, and was still exploring and perfecting their arrangements for the songs, the band and audience discovering the new material together. The band brought the same dedication to excellence in recording the show as they do with their performance. An audio-only version of the concert will be available in Headphone Surround, in formats up to uncompressed 24-bit/192 kHz from vendors like Pono.

Every one of the show’s mixes was mastered to 2” analogue tape and digitized separately for each audio format. The audio quality was maximized through the use of a new audio engineering process, Harmonic Phrase Analysis, which was developed specifically for use at the band’s show at Manchester Metropolitan University in England, and the video was mastered by special effects company Cinnafilm, using their Dark Energy technology (IMAX). Using 24 different cameras to record the performance (!), the resulting sound and imagery is the next best thing to actually witnessing the show yourself.

Second Nature was released in late 2014, the band finding new fans with its expansive sound and dynamic live performances. About the album, All Music Guide’s Matt Collar wrote “if on their debut Flying Colors were finding their footing as a neophyte ensemble, on Second Nature they reveal a newfound cohesion born out of their 2012 tour …consequently, this is an album that balances the group's virtuosic talents with moments of orchestral lyricism, folk-inflected balladry, and powerhouse rock anthems.” Featuring eight of nine songs from Second Nature, along with other inspired material, I expect that Second Flight is gonna kick ass!

Buy the CD from Amazon.com: Flying Colors' Second Flight: Live At The Z7