We’re sad to have to report that Texas blues-rock guitarist Smokin’ Joe Kubek died from a heart attack on Sunday, October 11th, 2015 at the age of 58 years old. Kubek passed away shortly before he was to perform at the Pleasure Island Seafood & Blues Festival in North Carolina.

Born in Pennsylvania in November 1956, Kubek grew up near Dallas, Texas. Influenced by artists like Eric Clapton and Jeff Beck and, later, Muddy Waters and Howlin’ Wolf, Kubek began playing professionally at the tender age of 14 years old, backing artists like the legendary Freddie King. Gigging in and around the Dallas area throughout the 1970s and ‘80s, Kubek worked with R&B singer Al “TNT” Braggs and became associated with artists like Albert King, B.B. King, and Stevie Ray Vaughan, with whom he became close.

A chance meeting with fellow bluesman Bnois King at a Monday night jam session in 1989 would change both men’s fortunes. Kubek and King became close friends and they quickly developed a remarkable music chemistry by mixing their two individual styles – Kubek the raucous lead guitars and slide player, King a more nuanced rhythm guitarist. The Smokin’ Joe Kubek Band featuring Bnois King released its debut album, Stepping Out Texas Style, in 1991 and soon branched out beyond the Dallas area to perform clubs and festivals across the U.S. and internationally.

The pair released eight albums for the Bullseye Record label circa 1991-2000, signing with Blind Pig Records for 2003’s Roadhouse Research. Now billed as just ‘Smokin’ Joe Kubek & Bnois King,’ the duo’s popularity continued to grow, and they were regularly playing 150 dates a year in the United States, Canada, and Europe, which they toured twelve times. After releasing three acclaimed and successful albums for Blind Pig, Kubek and King signed with Alligator Records in 2008, releasing the Blues Music Award-nominated album Blood Brothers, following it up with another BMA-nominated disc, Have Blues Will Travel, in 2010. 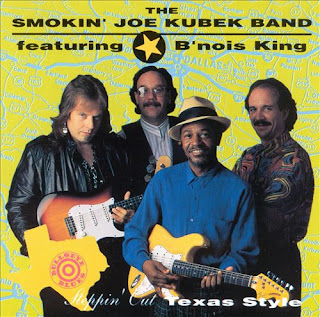 About that album, the Reverend wrote in Blues Revue magazine, “after better than two decades playing together, the chemistry between blues guitarists Smokin’ Joe Kubek and Bnois King is undeniable. The two fretburners have developed a distinctive blues-rock sound that they seldom stray too far away from, and long-time fans will be relieved to know that Have Blues Will Travel follows this tried-and-true Kubek/King formula to a tee; that is, guitar-driven, houserockin' gutbucket blues delivered with Lone Star state panache.”

Kubek and King released a pair of albums for the Delta Groove label – 2012’s acoustic Close To The Bone, and 2013’s Road Dog’s Life – before landing back on Blind Pig for the release this year’s Fat Man’s Shine Parlor album. Smokin’ Joe Kubek and Bnois King had a wonderful musical synergy that translated well to album but positively burned down the stage in a live environment. Kubek’s talents and contributions to the blues will be missed…