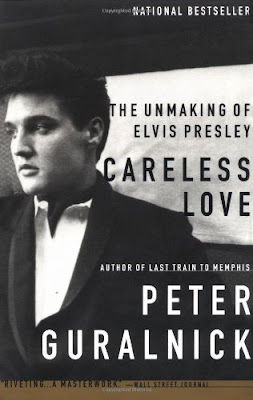 Subtitled “The Unmaking Of Elvis Presley,” Careless Love is Peter Guralnick's second book on the great American icon, a sequel of sorts to the writer's critically-acclaimed Last Train To Memphis. Picking up where his first book left off, Guralnick chronicles the life of Elvis from his induction into the Army in 1958 through his death almost twenty years later.

Careless Love, by any accounts, is an exhaustive work, with some six hundred and fifty pages of story, over six hundred footnotes and more than a dozen pages of bibliography. For his work on both books, Guralnick is to be envied as a scholar and a journalist. Created from hundreds of personal interviews, magazine articles, and books, Careless Love will leave you knowing more about the rise and fall of Elvis than you ever cared to know.

Nonetheless, it's a story worth telling. Elvis was the first true rock star, and if his excesses and undignified death have been documented extensively elsewhere, they've not been done to this extent or provided such context. Guralnick's Elvis is a troubled man, an artist whose startling rise to fame only created its own problems. Elvis had his eccentricities, to be sure – his fondness for underage girls, for instance, is knowledge to even the most casual Elvis fan, but Guralnick puts it in perspective, with Elvis' desire for innocence and purity represented by these teenage paramours. Elvis was also a responsible man, a corporate kingpin with dozens of relatives and employees on the payroll.

Most of all, Guralnick's Elvis was an immature man, burdened with unprecedented fame and the fortune to indulge his fantasies. Self-centered to a fault, Elvis always had to be the center of attention and affection, and would often play friends, relatives and employees off one another, manipulating them for his own purposes and enjoyment. Given the sordid debauchery of today's standard rock star, Elvis was a choirboy. He always had his girlfriends, often times carrying on relationships with more than one woman (or girl) at a time.

He was sincerely against drugs, although his own abuse of various pharmaceutical substances escaped him. He and his posse often got rowdy and tore up hotels and such, and, at times, would rough up overzealous hangers-on. But, in his heart Elvis was a good-natured, conservative, God-fearing mama's boy from deep in the heart of Dixie. All else aside, this is how Elvis pictured himself, and who are we to argue with it?

Guralnick goes into great depth in Careless Love on the relationship between Elvis and Col. Tom Parker, his manager and promoter and, perhaps, the real creator of the myth that was Elvis. It's interesting to read of the love/hate relationship between Elvis and the older Parker, the lengths to which Parker would go to ensure “his boy's” success and loyalty. The details of Elvis' relationship with Priscilla are also laid bare, from his earliest infatuation with a teenage girl through their stormy marriage and eventual divorce.

One important myth, that of Elvis' racism, is touched upon only marginally by Guralnick, mostly in tales of Elvis' meetings with various R & B artists. From my reading of Careless Love, it doesn't seem to me that Elvis Presley was more or less bigoted than any other Southern white male of the era. Often accused of “ripping off” black artists, Elvis has a sincere love for many blues, gospel, and R & B songs and artists and, indeed, helped the careers of many of the black artists he respected.

Another myth shattered by Guralnick is that of the “evil” Doctor Nick. A Memphis physician, who ended up on Elvis' payroll, Dr. George Nichopoulos is usually made the villain of the Elvis story. Guralnick gets to the heart of the matter, which is that Dr. Nick, as he was known, truly cared for Elvis. Realizing that he couldn't control his famous patient – much less oversee his actions twenty-four hours a day – instead Dr. Nick did his best to try and lessen the impact of various drugs on Elvis' system and keep the star alive, if not healthy. There were plenty of other unscrupulous physicians and pharmacists who were ready and willing to provide whatever pills and powders that Elvis wanted, and Dr. Nick fought a valiant battle to try and keep Elvis from killing himself. He failed in the end and, with Elvis' death, became the scapegoat for Presley's self-destructive behavior.

At its core, Careless Love is the story of a man overwhelmed by his fame and the expectations that accompanied it. Like many artists that would follow, Elvis fell prey to celebrity and its requirements. An uncertain man, Elvis was never quite sure that he was good enough, that he could juggle performing and recording and movies and keep the fan's adoration that he craved. Only in the music did Elvis find release, and in the end even it couldn't save him. It's the music that Elvis created, however, that built and continuesth and legacy that is Elvis Presley. (Little, Brown 1999)

Buy the book from Amazon.com: Peter Guralnick's Careless Love: The Unmaking of Elvis Presley
Posted by Rev. Keith A. Gordon at Thursday, October 01, 2015