50 Years of Blues Legend Bobby Rush in One Cool Box! 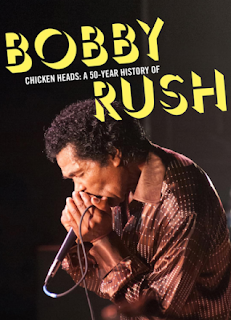 The Reverend has long sang the praises of blues legend Bobby Rush, one of the most talented cats to ever step up to a microphone and strum a guitar, and one of the most genuinely nice people you could ever meet. Over the course of a storied career that has spanned some five decades and earned Rush ten Blues Music/W.C. Handy Awards – including the coveted “B.B. King Entertainer of the Year” honor earlier this year – the singer has released a heck of a lot of great music for a plethora of record labels.

Any attempt to collect a complete Bobby Rush discography would put a serious dent in your bank account and probably drive a person certifiably mad trying to dig up a literal crate full of rare records. Thanks to the good folks at Omnivore Recordings, on November 27, 2015 you’ll be able spend your hard-earned coin on Chicken Heads: A 50-Year History of Bobby Rush, a four CD, 74-song deluxe box set that spans the singer’s entire career. Offering nearly five hours of music, Chicken Heads compiles material from 20 different record labels (!) and includes a 32-page booklet with notes by my esteemed colleague Bill Dahl, who knows this stuff better than anybody.

Born in Homer, Louisiana in 1933, Rush was originally influenced by his guitar and harmonica-playing father to experiment playing with a wire diddley-bow. Moving to Pine Bluff, Arkansas as a teen, Rush became friends with guitarist Elmore James and pianist Big Moose Walker and it was here that he formed his first bands. Relocating to Chicago in the 1950s, Rush played with blues greats like Muddy Waters, Luther Allison, and Jimmy Reed, and recorded at Chess Records. It would be the 1971 release of his Billboard R&B charting single “Chicken Heads,” on the indie Galaxy label, that would bring him to national prominence. Almost 30 years later, “Chicken Heads” would re-enter the charts after being featured in the movie Black Snake Moan.

Rush recorded his debut album, Rush Hour, in 1979 with producer Leon Huff for the Philadelphia International label, scoring a minor hit with the song “I Wanna Do The Do.” Rush would return to the south where he became a fixture on the “chitlin’ circuit,” touring the back roads of the southeast and southwest United States and earning a reputation as a dynamic live performer (Rush still performs almost 200 nights a year!) Along the way, the talented singer, songwriter, and musician developed his own unique style of blues called “folk funk,” the sound an amalgam of blues, soul, and funk music as only Bobby Rush could perform it. Rush has released better than two-dozen albums during his career, earned three Grammy® Award nominations, and a whopping 41 Blues Music Award nominations.

Chicken Heads: A 50-Year History of Bobby Rush offers material from Rush’s records for labels like Checker, Galaxy, Jewel, Philadelphia International, Malaco/Waldoxy, and LaJam Records as well as his own indie Deep Rush label. “It’s very exciting,” Rush says in a press release for the box set. “Truly I feel honored that someone would think enough of me to do this. The record side of it is the glory side of me and that’s the side that I want people to know and I’m grateful for that. I’m happy that someone thought before I leave this land to tell my story. I’m proud of it and flattered about it. I want the world to know that this is my first time and I want to say it for people to be enthused about me. I’m not enthused about all of the songs because at the time I didn’t think they were all good. But after you become a ‘legend,’ you look back and it all looks good. There are things you had in the can you didn’t want to put out, and then you get asked what you have in the can that’s never been heard to put it out.”