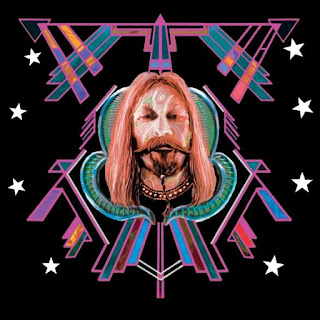 This LP appeared on your favorite music dealer’s shelves a few days ago, but in case you may have missed it, sonic provocateur Nik Turner (Hawkwind) released his new solo album, titled Space Fusion Odyssey. The follow-up to Turner’s critically-acclaimed 2013 release Space Gypsy, the new album includes contributions from a stellar cast of talented guests, including Billy Cobham, Robby Krieger of the Doors, Steve Hillage and Gilli Smyth of Gong, Soft Machine’s John Etheridge, and Amon Düül II founder John Weinzierl, among others.

Released by Cleopatra Records’ Purple Pyramid imprint, Turner’s Space Fusion Odyssey CD comes packaged in a mini-LP gatefold sleeve with a 12-panel poster, while a vinyl version arrives in a deluxe 12-panel poster fold-up jacket, pressed on glorious, gorgeous starburst colored wax. Leading what he’s dubbed the Interplanetary Arkestra (in honor of jazz legend Sun Ra), Turner applies his otherworldly sax and flute playing to an ambitious set of jazz-fusion influenced psychedelic space-rock that is quiet unlike anything you’ve heard before (don’t believe me – stick the video below into your earholes and if the swirling guitarplay of Robby Krieger and Megadeth/Ohm axeman Chris Poland doesn’t blow your little mind, nothing will…)

Later this year, Turner will be publishing The Spirit of Hawkwind 1969-1976, the book promising to be the definitive biography of the legendary space-rock innovators, documenting the band’s gravy years. Written by Turner and noted music historian Dave Thompson, the hardcover tome will include over 250 pages of rare and unseen photos as well as a comprehensive Hawkwind discography – no mean feat, considering the extensive and oft-confusing Hawkwind/Hawklords back catalog. Definitely a book for the Hawk-geek among us (the Reverend included…)